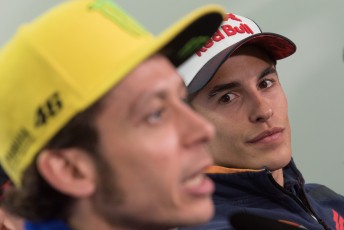 Valentino Rossi is not expecting his rivalry with Marc Marquez to erupt again when the MotoGP season kicks off at Qatar this weekend.

A much publicised clash between the pair during last year’s Malaysian Grand Prix sparked a heated debate between the duo away form the track.

The pair are due to square up against each other for the first time since last year’s war of words, with Rossi stating the rivalry will continue, but is confident it won’t boil over on track.

“The rivalry is always something extra for motorsport, but I think nothing particular or special will happen,” said Rossi.

“I think that on the track it will be the same. Everybody tries to give the maximum to ride in front, but without something more special.”

The view is shared by Marquez who is expecting a tough start to his campaign following a mixed pre-season for the Honda team.

“Like we saw in the past in MotoGP sometimes you try to beat your opponent – but in the end I have 20 opponents in MotoGP and I must fight against each one to try to win the championship, which is my target,” said Marquez.

“This year has not been an easy pre-season looking at the results.

“But we improved and we kept a constant pace, a progressive line towards the most important and it looks like here in the last test in Qatar we did a huge step and we were closer.

“Anyway, we know we struggle on this track because it’s one of the worst tracks for us but the motivation and ambition of the first race can always supply what you need.”

“We’ve had some time to go through the data from the Qatar test and we know where we need to improve the bike when we head back for the first race of the season,” said Miller.

“Since the test I’ve also had more time to work on my injured ankle and I have much more mobility in the joint now, which will definitely help this weekend.

“I’m feeling really good after a solid week of training and I’m looking forward to getting the new season started.”