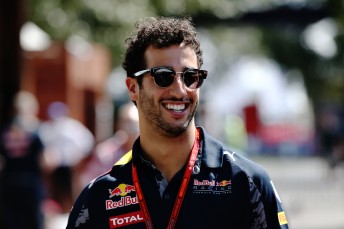 Daniel Ricciardo has downplayed talk of him joining Ferrari next season, stressing his focus on the year ahead with Red Bull Racing.

The Australian was responding to comments from 1980 Formula 1 world champion Alan Jones who told media this week that Ricciardo’s future is with the Maranello team.

Ricciardo has been touted as a potential replacement for Kimi Raikkonen amid Red Bull’s recent struggles.

The three-time grand prix winner is reportedly out of contract with the Milton Keynes operation but has now hinted that this is not completely the case.

“I heard some comments from yesterday and got asked the question and last year it was asked too,” said Ricciardo when asked of Ferrari in the pre-event media conference.

“I don’t have much more to say. It is still very early in the season and to give you a boring but honest answer I’m completely focused on now and with Red Bull.

“I’m not exactly out of contract either, so don’t get too excited.”

Although admitting Red Bull will struggle to compete with front-runners Mercedes and Ferrari this season, the Perth native is encouraged by his team’s improved race pace.

“I think the long run pace will be better for us. In qualifying we are not going to be as strong,” added Ricciardo.

“It’s hard to answer the question fully but we will see on Sunday.”