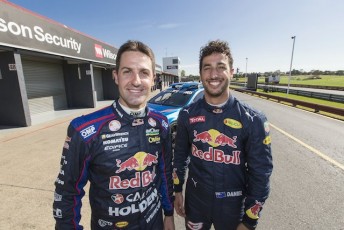 Ricciardo with Whincup at Sandown

Australian Formula 1 star Daniel Ricciardo has revealed a lifelong ambition to compete in the Supercheap Auto Bathurst 1000 after testing a Triple Eight V8 Supercar this week.

Having focussed on open-wheelers for his entire career to date, the 26-year-old says he’d be keen to race in V8 Supercars’ showpiece event once his Formula 1 career is complete.

Ricciardo recently fielded an open offer from Dale Earnhardt Jr to compete in a NASCAR Xfinity Series race, but stressed a desire to concentrate on Formula 1 for the time being.

“Let’s say that if I achieve everything I want to in F1 and if I can keep racing then sure (I’d be keen to race the V8),” Ricciardo told Speedcafe.com.

“I have expressed a real love for NASCAR but also V8s.

“Bathurst has always been a bit of a childhood dream I guess and I would love to take up the opportunity to do Mount Panorama at least one day.”

Ricciardo’s openness to the touring car event is a stark contrast to that of his Red Bull F1 predecessor Mark Webber, who has long maintained his disinterest in the category.

“I have obviously known of Jamie for many years, even when I started racing go karts he was at the top of the karting scene back in the day,” said Ricciardo.

“It is a name I have known since I was a kid but I never properly met him so it was cool to hang out with him and drive the Sandman.

“He gave me a few tips and I finally got to drive a V8 with a roof over my head.

“The power and everything was good fun and the way it slides around. It wasn’t a full race spec but it had enough ponies.”

Whincup praised Ricciardo’s level of commitment in the car, which lacks the rear grip of a regular V8 Supercar thanks to its modified bodywork.

“He’s obviously the real deal and he loved it,” said Whincup of Ricciardo.

“It’s one of the loosest cars you’ll drive the old Sandman. 700 horsepower and zero rear aero whatsoever, it’s just a couple of surfboads on the roof.

“It gets a few high speed wobbles at the end of the straight. It’s got zero rear brakes at high speed.

“He went hard. I actually thought he was going to shunt over Dandy Road. I was sure of it, but he kept it on, which surprised me.”

Next Story Mercedes and Ferrari ready to lock horns