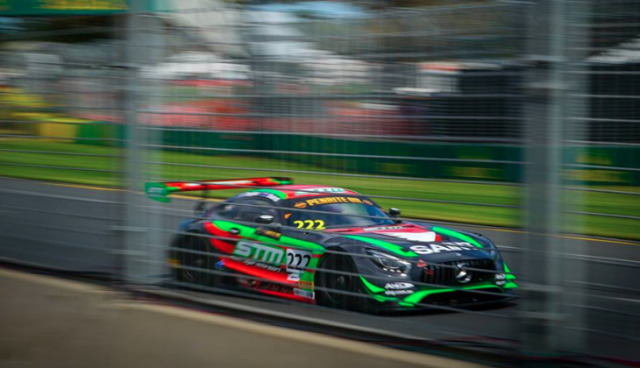 Instead of the usual timed compulsory pit stop system, the  times were added to each driver at the end of the race.

Baird’s compulsory added time was four seconds less than Mies’ which saw him take the win by 5.5 seconds.

Marcus Marshall brought the Supabarn Supermarkets Audi R8 in a distant third to complete the podium.

Mies made no mistakes at the start with the reigning Australian GT champion fending off the Tekno Autosports’ McLaren of Jonathon Webb on the run down to Turn 1.

A strong start from Baird saw the Mercedes pilot slot into second as Webb began to struggle for pace, resulting in the McLaren dropping down the order.

At the front Mies and Baird quickly opened up a sizeable gap on the chasing pack with the pair locked in a battle for the lead.

In the end, Baird was unable to find a way by settling for second which was enough to take the win once the handicaps were applied.

After starting from ninth on the grid following a qualifying exclusion, Montermini brought the Vicious Rumour Racing Ferrari 488 GT3 home in fourth.

Dean Canto had crossed the line in fourth but his handicap penalty dropped him to ninth as Nathan Morcom (McLaren) rounded out the top 10.

Tony D’Alberto produced an impressive drive to pass half the field from the back of the grid to finish in 16th position.

Meanwhile, Steven Richards was forced to retire the SRM BMW M6 GT3 on the opening lap.

The Australian GT Championship will return to action on Friday for Race 2 from 1125 local time.