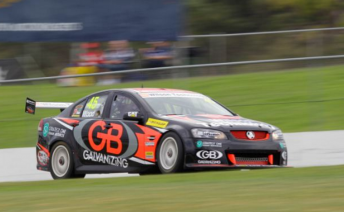 Pollicina is the first to take advantage of the category’s new era which sees it welcome VE Commodores and FG Ford Falcons for the first time.

The Tasman built cars will be driven by Pollicina and long-time friend Anthony Loscialpo, who moves into a V8 Supercar for the first time following extensive running in production cars.

Pollicina expects that his VEs will prove a front-running package this season.

“I purchased a couple of VEs in 2012 from Tasman Motorsport and I’ve been sitting on them since,” Pollicina explained.

“I raced one car (TMS 002) – that finished second at Bathurst in 2008 – in the Development series in 2013 and last drive it in the Bathurst 12 Hour support races this February. The car seemed strong at Bathurst.

“Recently I also acquired TMS 003 which was built in 2009 as a spare shell but never actually ran in the main game.

“Having two identical cars will allow us to consolidate the spares package.”

The 2016 Kumho V8 Touring Car Series kicks off with the Shannons Nationals at Sandown on April 1-3.