Penske to use Melbourne base for tight turnaround 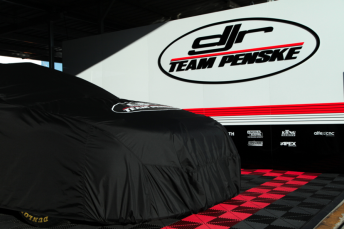 DJR Team Penske will remain in Melbourne after the AGP

DJR Team Penske will lean on the resources of Roger Penske’s business empire to ease a tight turnaround between the upcoming Albert Park and Symmons Plains V8 Supercars events.

After competing at this weekend’s Australian Grand Prix meeting, the two-car team will work from Penske Power Systems’ Altona, Melbourne, facility to prepare for the April 1-3 Symmons Plains meeting.

The workshop functions as a service and parts centre for Detroit and MTU engines, which are distributed by Penske in Australia and New Zealand.

DJRTP managing director Ryan Story says that avoiding the 3,000km round trip from Melbourne to its Yatala, Queensland, workshop and back again is primarily about looking after the squad’s staff.

The crew will work on the cars in Melbourne until next Thursday, when they will be flown home to spend Easter with their families, before the truck is dispatched for the Bass Strait ferry crossing early the following week.

“Considering the short turnaround and the fact that Easter is in the middle, it makes sense to prepare the cars in Melbourne,” Story told Speedcafe.com.

“We’re fortunate through the Penske business to have a fantastic facility that we can utilise at Altona.

“It adds some expense, but it’s a people business and we think it’s important to make sure that the staff have time off over Easter and time with their families at the start of the school holidays. 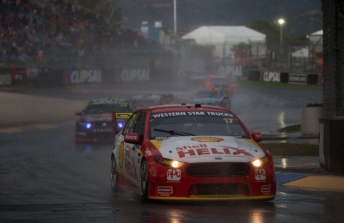 DJRTP failed to make the most of its speed in Adelaide

“The calendar isn’t without its challenges, particularly for the Queensland teams, but later on in the season the Victorian teams obviously face similar issues.”

Streamlining the process is the fact that the Fabian Coulthard and Scott Pye driven cars will remain in their respective Detroit and Western Star Trucks colours for Symmons Plains.

Story has meanwhile moved to identify and address issues within the team’s communication and pit strategy procedures following its dramatic failure to comply with the 140 litre fuel drop rule at the recent Clipsal 500.

Coulthard and Pye took the flag at the end of a chaotic rain hit race in second and third respectively, only to be demoted to 16th and 17th post-race.

The team had decided to take the time penalties rather than complete extra stops to fulfil the 140 litre drop after miscalculating its fuel requirements during the race.

Mid-race confusion had also seen Coulthard and Pye pit simultaneously under green flag conditions, costing the latter time as he waited for service.

It was a sorry end to a weekend that had seen both Pye and Coulthard score pole positions on a circuit that was not expected to suit the team’s package.

Pye’s quest for a maiden victory on Saturday had earlier come unstuck thanks to a pitlane issue, with the car dropped from its jacks before the left-rear tyre change had been completed.

“We made a litany of errors throughout that weekend when it came to going racing and for us to be competitive we just can’t do that,” said Story.

“A lot you can contribute to the fact that we have put a whole new group of people together, but we’ve gone out and systematically employed the best people available and we have every confidence in our people.

“What we need to do is to ensure that they have the right tools for the job and the best equipment available. That is something that we’ll have to continue to address.

“The other thing is to make sure we have procedures and processes in place that allow us to eliminate some of the errors that were made on Sunday.

“We’ve taken a lot away from it and have already made progress on understanding what went wrong and putting in place the best ways to address it.

“Mistakes of a similar type will be unacceptable to us.”