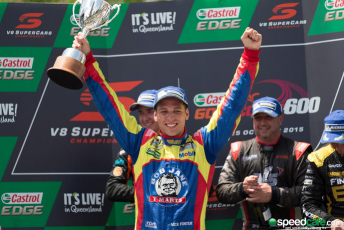 The 24-year-old will contest the German Carrera Cup with the squad, which is owned by Porsche’s reigning World Endurance Championship winning co-driver Timo Bernhard.

Basing himself near the team’s workshop in Stuttgart, Foster flew out of Australia this week to spend time with his car and crew ahead of the season opener at Oschersleben on April 16-17.

Working on the deal since November, Foster’s move to Europe follows a one-off drive in the combined French/Italian Carrera Cup event at Spa Francorchamps last year as well as an appearance at the Porsche Scholarship test in Germany.

“For me it’s a big step and we’ve worked hard to get partners on board to follow us over to Europe. That side has definitely been the toughest,” Foster told Speedcafe.com.

“I’m very fortunate that I’ve got good backers in Outback Camps Australia and Bob Jane T-Marts that have really helped me make this step. Thiim in action for Team75 at the Nurburgring last year

“I’m excited to get over there but also just to get back racing again. It hurt a little bit watching (the opening Carrera Cup Australia round at) Clipsal from the sidelines.”

CLICK HERE for more with Foster in Speedcafe.com’s Cafe Chat.

Bernhard, who co-drove to the 2015 WEC title with Australian Mark Webber and Kiwi Brendon Hartley, says he’s looking forward to working with Foster.

“Nick has made quite an impression and we’re excited to have signed the reigning Australian Carrera Cup Champion for this year’s campaign,” said team owner Timo Bernhard.

“Nick knows the cup and the cars and we’ll give him the best support to get used to the new environment as quickly as possible and to perform well.”

Although focussed on his role with Team 75, Foster is likely to make a return to the Australian championship for the two-diver Rennsport event at Sydney Motorsport Park on April 29-June 1.