Joey Mawson has been retained by Van Amersfoort Racing

Having been in contention for the title until the final round, the 2015 CAMS Young Driver of the Year is setting his sights firmly on championship success.

“It is obvious. I have some unfinished business in Germany,” said Mawson.

“We were pretty close last year, but this season I have only one goal: winning the title in ADAC F4.

“Van Amersfoort Racing spectacularly improved their facilities over the winter, so I am glad to be part of the VAR family again.”

Mawson’s German F4 campaign begins with a visit to Oschersleben from April 15-17. 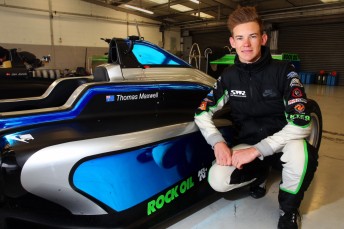 The Darwin teenager graduates to the popular series having finished fourth in the Australian Formula Ford Series last year.

Maxwell tested the BRDC F4 Tatuus-Cosworth single seater during the off season before being officially announced at today’s season launch.

The 17-year-old will join Australian Thomas Randle in the championship which begins at Snetteron from March 27-28.

“I’m super excited to be signing with SWR in such a fantastic championship,” said Maxwell.

“It’s a credit to everyone back in Australia who’s shown support and helped me get to this level. Everyone at the team is incredibly professional, I’m looking forward to a strong year.” Meanwhile, AGI Sport has confirmed that Nick Rowe will join the team for a tilt at the CAMS Jayco Australian Formula 4 Championship.

Rowe raced for the Sydney squad for selected rounds in the championship last year, recording a win and three podiums.

“I’m super excited to be confirmed for the Australian Formula 4 championship, I can’t thank AGI and SCT Logistics for the amazing support, the cars look awesome,” said Rowe.

Rowe will join the already confirmed Jack Smith at the team with the pair set to pilot the squad’s newly liveried SCT Logistics backed Mygales.

The championship kicks off at Symmons Plains from April 1-3.