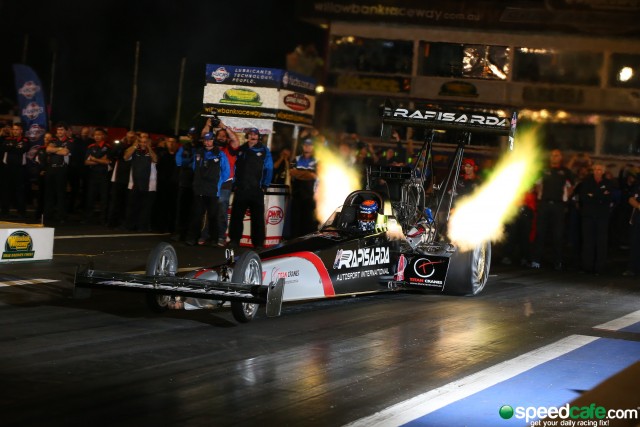 McClenathan in action on his way to victory at the Winternationals

The American drag racing start will join the renowned Santo Rapisarda Top Fuel squad to do battle for the Louie Rapisarda Trophy – a title that honours the late son of event sponsor and team owner.

McClenathan has enjoyed success at the Queensland event having taken out the iconic Winternationals last year and is eager to repeat the feat over the Easter weekend (March 25-26).

His last appearance in the Australia saw the veteran win at the Sydney Dragway’s Nationals in November.

As part of his Easter campaign, McClenathan will bring credentialed US Top Fuel tuner and Rapisarda team regular Lee Beard with him to Australia.

“To win the Winternationals was awesome, as was to win at the Nationals – I think having won those does help my confidence in heading to Easter,” said McClenathan

“I guess my biggest thing is that I know for (team-mates) Damien Harris and Wayne Newby it is a points game in chasing the championship, where I just come in and mess the whole point system up.

“I enjoy the competition from all the racers, I really do. I love to come out and race all of them, but they all know that I am not there just to show up and run the car, I am there to win.

“We will be coming down and qualifying as best we can, and then it will come down to trying to win the race and make it three Aussie event wins in a row, and chase the Louie Rapisarda Trophy.”