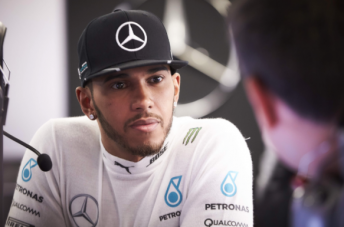 Lewis Hamilton believes he cannot afford to be complacent this season with the world champion expecting stronger opposition.

The Mercedes driver surged to a third world title last year with three races remaining after chalking up 10 race victories.

After proving the class of the field last season, the Brit heads into this weekend’s Australian Grand Prix as the favourite to take out the 2016 championship.

Testing saw Mercedes clock up the most mileage with the W07’s true pace yet to be revealed having spent the majority of the pre-season utilising the medium compound tyres.

Despite Mercedes’ ominous form ahead of Albert Park, Hamilton believes he will require something extra to fend off his rivals this year.

Ferrari is expected to launch a stronger challenge having appeared to close the gap to the Silver Arrows in testing, while the Brit’s team-mate Nico Rosberg will be eager to avenge two consecutive championship defeats.

“We’re always searching for perfection. But that target is always shifting and you’re constantly faced with new challenges to reach it,” said Hamilton.

“Just as you think you’re close, suddenly you fall further back – like someone dangling a carrot on a piece of string and whipping it away just as you reach for it.

“It’s tough mentally – but that’s a good thing, as it forces you to be resilient and seek improvement in every area.

“I know there’s still more to come from me – I think I’ve shown that in the past two years.

“There certainly needs to be some extra in my tank, as the competition will be stronger than ever this year.”

While fully expecting to be pushed harder by his rivals, Hamilton also feels a clampdown on radio communications between team and driver will prove to be added challenge.

“The changes to the radio rules will have a big impact,” added Hamilton.

“The engineers now can’t give you prompts or reminders that might affect performance during the race, so you have to remember so much more.

“This even applies to strategy, so when it’s shifting throughout the race you won’t be in the loop. It will be tough – but hopefully it will make for more exciting races.”

The first practice session of the new F1 season at Melbourne’s Albert Park is scheduled for Friday from 1230 local time.