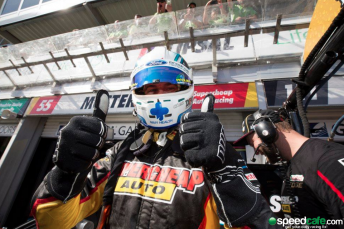 Chaz Mostert will make an early return to Mount Panorama when he takes part in the inaugural Hi-Tec Oils Bathurst 6 Hour later this month.

The Prodrive V8 Supercars star is set to share a BMW 335i with long-time friend Nathan Morcom in the Easter Sunday race.

It will mark the first time Mostert has been to Bathurst since his season ending accident during qualifying for last year’s Supercheap Auto Bathurst 1000.

“Nathan Morcom and I have been friends for a lot of years, we used to race with each other in support categories,” Mostert told the Western Advocate newspaper.

“When I heard they were doing the six hour, I was like ‘yeah, it would be bloody good to have a crack.’

“It is just a cool weekend to be there racing the BMW at Bathurst.”

The 6 Hour falls on the weekend between Mostert’s Albert Park and Symmons Plains V8 Supercars commitments.

Mostert and Morcom will be aiming for a hat-trick of victories together in the BMW, having teamed up for outright success in the 2011 Eastern Creek 6 Hour and a class win at the 2012 Phillip Island Australian Endurance Championship meeting.

“It is one of those cars that is really nice to drive, you really don’t have to spend long in the seat to adjust, it’s like second nature,” said Mostert of the BMW.

“Most people are going to go on a holiday over Easter, so it’s going to be pretty cool to do your passion at Bathurst.”