Montoya wins as Power sits out in St Pete 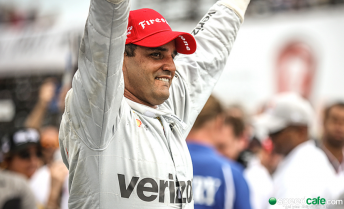 Juan Pablo Montoya took victory in a season opening St Petersburg IndyCar Series race that saw Will Power forced to sit on the sidelines with concussion.

Despite taking pole position on Saturday, the Australian was diagnosed with mild concussion following qualifying as a result of his practice crash the day prior.

IndyCar doctors ruled Power out of the race as a result, leaving Team Penske to field Spaniard Oriol Servia in its #12 Dallara-Chevrolet instead.

“Following his on-track incident on Friday, Will Power displayed no signs of injury and was evaluated and cleared by the IndyCar medical team,” explained an IndyCar statement.

“Per IndyCar protocol, we also evaluated the data collected from his ear accelerometers, which provides data specific to the impact on a driver’s head, and nothing gathered from that data indicated further evaluation was required.

“After learning of Will’s symptoms following qualifications Saturday, he was required to submit to another evaluation by IndyCar Medical Director Dr. Geoffrey Billows, at which point he was diagnosed with a mild concussion.”

Power added his disappointment at the shock turn of events via Twitter.

“Heartbroken to not be out there today,” he wrote.

“Focusing on getting healthy. Thank you to everyone for the support. Hope one of the boys can bring (home) a win.”

“We started the year last year like this,” smiled Montoya, who lost last year’s title to Scott Dixon on a countback.

“I felt this morning we had a really good car and it paid off.”

Pagenaud inherited pole from Power and led Montoya during the early stages, only to lose the place on a restart halfway through the 110 lap contest.

A late-race move by Ryan Hunter-Reay on Helio Castroneves saw the Andretti driver deny Penske a sweep of the top three places.

Servia meanwhile started from the back and eventually finished 17th after being caught up in a multi-car accident triggered by Carlos Munoz making contact with Graham Rahal.

Marco Andretti caused the day’s only other caution with a Turn 1 spin while attempting an overtake on Luca Filipi.

That lap 47 mishap saw Conor Daly and Tony Kanaan go off-sequence by electing not to pit, allowing the former to lead a total of 15 laps.

Next Story Split liveries for DJR Team Penske at AGP