Harvick by centimetres in Phoenix

Harvick by centimetres in Phoenix 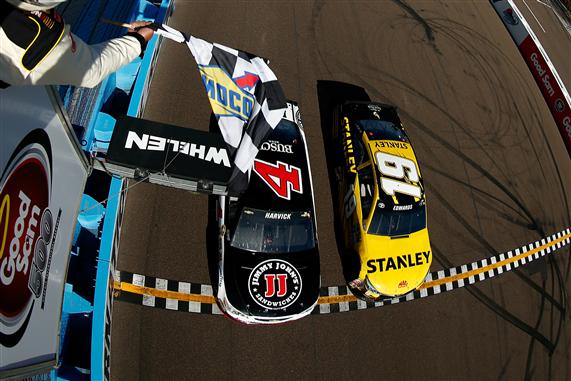 Kevin Harvick has proved that you can win an overtime race in NASCAR on old tyres as he held off Carl Edwards by centimetres at Phoenix.

The result was Harvick’s first race win of the year, but his eighth career victory at the Arizona track.

Harvick went to the front just after half-distance as long runs on tyres saw a number of over-heating issues with the rubber amongst all the competitors.

The last of these occurred for Kasey Kahne, who melted the bead on his front right and hit the fence with six laps to run.

Up until that point Harvick had been holding a handy lead with a fast-finishing Dale Earnhardt Jr. in pursuit.

Harvick and Earnhardt Jr. both chose track position and stayed out while others came to pit road for a mixture of two and four tyres, plus fuel.

Edwards, who was in third, took two tyres and quickly moved to second on the restart during the green-white-chequered finish.

On the last lap Harvick did all he could to keep Edwards at bay and the two bounced off each other heading to the finish line, where the pair were split by just 0.01s.

“I wanted to straighten it and get back into the throttle before the end,” stressed Harvick in Victory Lane.

Although disappointed to have finished second, Edwards said crashing Harvick for the victory was the last thing on his mind.

“I didn’t want to wreck him,” said Edwards.

“I ran into him as hard as I could without wrecking him, then it became a drag race.”

NASCAR stays on the West Coast next week at Fontana in Southern California.