This year’s season opener will feature a controversial elimination qualifying format which has already garnered criticism from drivers in the lead up to the Albert Park curtain raiser.

Introduced to spice up qualifying, the grid will be set by an hour long session split into three segments.

Following final sign off from the FIA, Q1 will last 16 minutes with the slowest driver eliminated from proceedings after seven minutes.

Eliminations will take place every 90 seconds thereafter until there are 15 cars remaining.

The second segment of qualifying will comprise a 15 minute session with eliminations beginning after six minutes.

The final eight cars will take part in Q3 in a 14 minute session following the same elimination procedure until there are two drivers left to do battle for pole position.

Australian Grand Prix Corporation CEO Andrew Westacott believes the changes will add to the excitement of the event and is confident the format will be communicated clearly to fans.

“We will be seeing it for the first time in Melbourne and I’m very happy to be showcasing it to the world,” Westacott told Speedcafe.com.

“We have got to be ready for it from the point of view of the fans.

“One of the things Formula 1 needs to do is to make sure it (the new format) is easy to communicate to people at the circuit and watching the world feed.

“This is going to be the role of the 32 super screens around the venue.

“When you break it down in tabular fashion as to how many people get knocked out in each of these sections of qualifying, it is rather simple.

“There is going to be a degree of uncertainty and excitement for the drivers and the teams.

“There are probably going to be a few dark horses that get though the field with someone being in the right spot at the right time.

“I have no doubt the FIA will be fully briefing marshals (of the changes).”

While some drivers have been unimpressed by the changes, 1980 Formula 1 world champion Alan Jones approves of the concept.

“There are people saying if it is not broken don’t fix it, but the moment you don’t do something people will say it is getting boring.

“Honestly I believe this could be really good. I think it is going to make it interesting.”

The new qualifying procedure will be run for the first time on Saturday from 5pm local time. 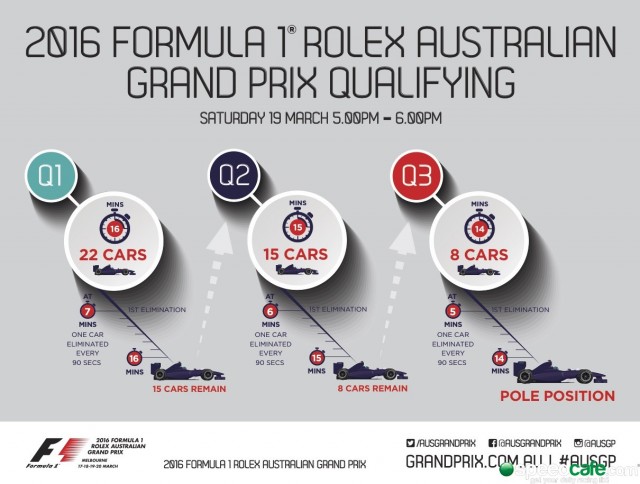