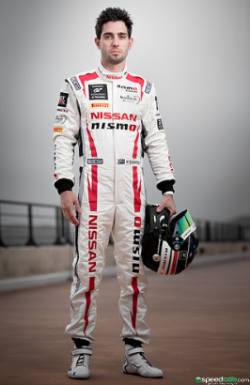 The Queenslander is gearing up for his fully fledged professional motor racing debut as factory Nissan driver having won the renowned GT Academy scheme, which transforms gamers into professional racing drivers.

Since seeing off a selection of the world’s best gamers to land a coveted professional contract, the former postal worker has undergone a three month driver development program in the United Kingdom.

After being selected for the manufacturer’s Blancpain Endurance Series squad in the off-season, the Australian stepped up his preparations for his race debut by completing a two-day test at the Paul Ricard circuit.

Simmons jumped behind the wheel of the GT-R GT3 that he will share Sean Walkinshaw, the younger brother of the Holden Racing Team boss Ryan, and fellow GT Academy winner and Romain Sarazin.

The Brisbane-based driver logged valuable seat time which has left him feeling suitably ready ahead of the championship’s opening round at Italy’s daunting Monza circuit next month.

“I wish I could say I’m 100 percent ready but I feel prepared and that is a big thing for me,” Simmons told Speedcafe.com.

“I like to feel that there has been no stone left unturned and I got the most out of every day.

“I am even more motivated, now I have been back in the car, to make sure I am as prepared as I can be for the first round.

“I feel confident and obviously excited to start my first international race.

“I felt quite pleased with what I was able to do but I know I have got a long way to go leading into Monza.

“There is so much to learn but hopping back in the car was a really crucial thing for me.”

Simmons will now head back to Australia, where he will continue his preparations, before retuning to Europe for a Nissan training camp ahead of the Blancpain Endurance Series curtain raiser from April 23-24.

While back down under he plans to return to his simulator roots alongside a strict fitness regime to ensure he is ready for his factory drive debut.

“I’m more hungry to be better and make sure I’m the best I can be,” added Simmons.

“I will keep my fitness regime up but simulator work is crucial for me.

“I want to try and do some at home and get a good rhythm and consistency and the mental focus required for long stints which you can achieve on the simulator.”

Having now shared a track with GT racing’s elite at the pre-season test, he is under no illusions of the task ahead at Monza.

“Monza is quite a tight track. There is not much run-off so if you make a mistake there it could be your last. I need to have margin for error but I’m so excited to go there,” said Simmons.

“The last thing I want to do is put it in the wall and crash it. That is not going to help the team out or get us the result we want so I will ease into it and then start pushing.”