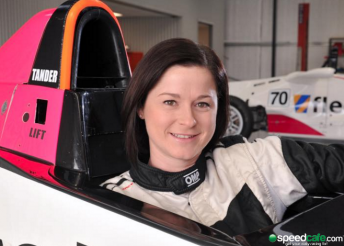 Mick Ritter expects that Leanne Tander will bruise some egos this season when she joins his legendary Sonic squad for an assault on the Australian Formula Ford Series.

Having run under her own Tandersport banner over recent years, preparation of the 35-year-old mother of two’s Mygale has been moved to Sonic ahead of the new season.

Tander, who was a race winner on the way to third in the 2000 Australian Formula Ford Championship, says she’s determined to return to the top step of the national podium with Ritter’s team.

To do so she will have to take on the latest crop of young stars across the six-round season, which will begin with the Shannons Nationals at Sandown on April 1-3.

“We simply don’t have time to do this on our own,” said Tander of moving away from her Tandersport operation, with which she finished 10th in last year’s series.

“With (husband) Garth’s Supercar program being so busy and with family commitments we have with our two children the idea of my racing program being in-house with Tandersport and us doing it all isn’t feasible anymore.

“With their experience, data and win record in Formula Ford the natural choice was always going to be Sonic.

“We’ve already had one test session so far and I was really happy with the way the team worked with me.

“It’s a relaxed but still focused and determined atmosphere. I feel really comfortable with the way it will all come together. I’ve got a good feeling about this.

“I’m not gridding up to make the numbers, I want to win races.”

Ritter says he has no doubt that Tander, who will drive Sonic’s only full-time national series entry, can contend for victories.

“You can tell she’s got the drive,” says Ritter.

“Racing with Leanne makes a lot of sense for us.

“We have a long history with she and Garth and I can’t wait to get started in Sandown to be honest.

“I think her younger rivals are going to be very surprised. There might be some egos shot down pretty quick.”