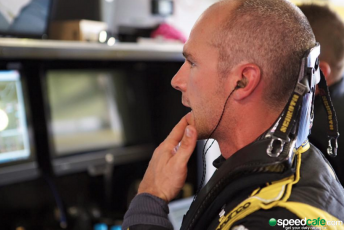 Lee Holdsworth envisages decent performance gains as the newest team on the V8 Supercars grid comes to grips with its Triple Eight-supplied chassis.

The hurriedly formed Charlie Schwerkolt owned Preston Hire Racing operation experienced a truncated start to its V8 Supercars life at the Clipsal 500 as the #18 Commodore was hit with unexpected brake balance issues.

“We just had a problem with the balance. It was locking the fronts on turn in which is an uncommon trait for a Triple Eight car,” Holdsworth told Speedcafe.com.

“We established we had a problem and rectified it and came out on the final day at Clipsal and it was an immediate improvement. I have much more confidence to drive the car now.

“I have to learn how the car needs to be driven.

“It probably needs to be tuned for me as well rather than exactly what they are running down the road (at Triple Eight).

“But I’m feeling a lot more positive. I knew that there was some kind of definite issue.”

Schwerkolt says the enormity of the challenge has been confronting but says his team will ultimately overcome the hurdles.

“It’s a massive challenge but we will get on top of it all. The support from Triple Eight is a major thing,” Schwerkolt said.

“We’ve got to build a relationship with them they’ve been great.

“We’ve got to get Lee happy in the car and make sure he performs.

“I’m proud of the team. They have had half a day off since Australia Day and that’s it going into Clipsal.”

CLICK HERE for more on Team 18 in this week’s Cafe Chat with team manager Jeff Grech.