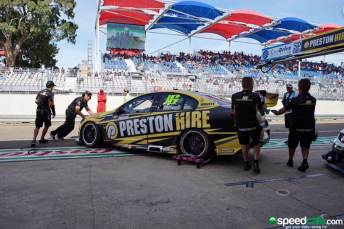 Grech (front) pushes the Team 18 Holden in the Adelaide pitlane

The long-time Holden Racing Team manager sat down with Speedcafe.com editor-in-chief Gordon Lomas to talk about the nuts and bolts of the freshly born single car team.

SPEEDCAFE: You’ve comeback to the category after leaving in 2009, what are the major differences in pitlane?

GRECH: When I left it was obviously the Project Blueprint car so I kept a keen interest in what the changes were through to Car of the Future.

So to now and in reality working on the cars they are extremely different in some key architectural areas.

But the principles are still the same.

A lot of it is for cost cutting, a lot to modernise it.

But all-in-all they are really the V8 Supercar of old with a little bit under the body that’s different which is to bring them into line with each other to allow other manufacturers to come in.

It was prohibitive but now it isn’t which is a good thing.

Coming into it Bushy, Stewie and Kevin have been in the category so they have brought me up to speed on some of the technical appointments.

The sport has changed a bit in regulatory rules and that’s also been a bit of a catch up.

Apart from that the initial challenge has been starting the team.

We made it to Clipsal, 12 weeks from getting the green light. 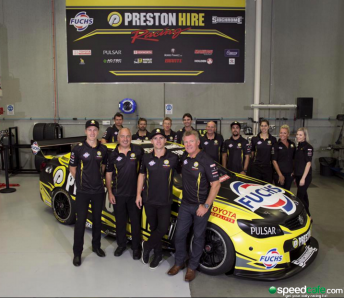 SPEEDCAFE: When Charlie (Schwerkolt) first approached you did you have to think about it, were you in fact ready to get back into it?

GRECH: I was absolutely (ready). Charlie didn’t have time to finish the question before I answered it. I definitely embraced it with both arms.

I had been thinking about getting back into it.

But when you’ve been out of it for a while, I realised people think you’re a bit rusty and there’s other people that might be more appealing.

SPEEDCAFE: It’s been six years since you left the sport completely. What did you end up doing?

GRECH: I ended up in the mining industry up in the Pilbara of Western Australia.

There was a couple of big infrastructure projects and as you know the last project was the Wheatstone LNG plant that Chevron are building.

That was a two-and-a-half year project and it was winding down.

With the resources tsunami that has hit the world especially Australia it has died off a lot.

I’d always been based in Melbourne and I’d only ever gone over there (Perth) for work and running my own business over there.

I’d been back for a year and been doing some odd contract work and then the opportunity with Charlie came up.

SPEEDCAFE: Obviously it (Team 18) started from a greenfield site, so it must have been a huge effort by everyone for the transporter to roll into the pit paddock at Clipsal?

GRECH: You just had to put your head down and bum up. I’ve been involved with this sort of situation before.

Going back as far as LP (Larry Perkins) when he left the Holden Dealer Team and started his own show.

HRT was going and then we started the K-Mart offshoot.

Any business to start, if you’ve been in the industry, you sort of know where to head but it’s always a challenge.

It’s been a challenge for Charlie and also me but I think we’ve done well to get to where we’ve got to. 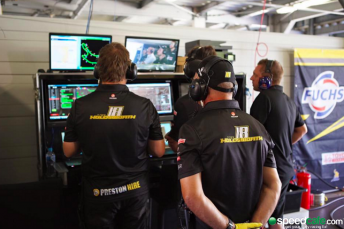 There is still a heck of a long way to go.

With the crew that we’ve got hopefully we can achieve some success down the road.

SPEEDCAFE: The car has obviously got a lot of potential, there have been some niggling issues with brake balance which was to be expected I guess.

GRECH: Yeah well we are still raw. Even though it is a Triple Eight car, it has had some success in its life, but they keep changing and we’ve got to change with them.

At the same time keep a close eye on what Lee is expecting out of the car because even within Triple Eight there would be slight tweaks between the drivers.

We’ve got to be diligent with Lee and make sure we can tune the car as good as we can.

And that is a learning process. Given that we had one test before we came here (Adelaide) it doesn’t really allow you a lot of time so we are still learning.

We will get there. The guys and girls in the team are very capable people and we are determined to get there.

Charlie is determined to have a successful team and we were working to make that a reality.

SPEEDCAFE: What are your expectations for the year?

GRECH: I won’t put a position to that performance but we are going to work like hell to go better than the race before and the practice session before.

Really all our attention now is obviously learning the car and improving every session.

We made improvements each day at Clipsal. So that’s the sort of steps we are taking.

It is all based around Lee and how he wants the car to behave.

Given that we know where Triple Eight are in their circle, we need to adjust in that circle. 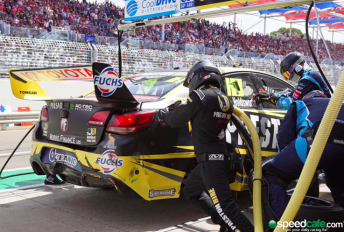 SPEEDCAFE: Your young bloke, Tom, was in Formula 4 last year so you were back around the paddock a bit. What’s he up to this season?

GRECH: Tom runs his own race. He wanted to do the Porsche GT3 Challenge Cup but he’s got to find his own money. I’m not going to be a mini bike dad. Never will. I’ve dealt with them long enough myself.

That was unachievable to get a budget. He didn’t go that well in F4 and there was a lot of reasons but I won’t go into it.

So the latest is a long time supporter of his, is looking at putting him in the Toyota 86 Series (starts at Winton from May 20-22).

So we’ll just see where he pops out.