Aussies team up for US Super Truck campaign

Aussies team up for US Super Truck campaign 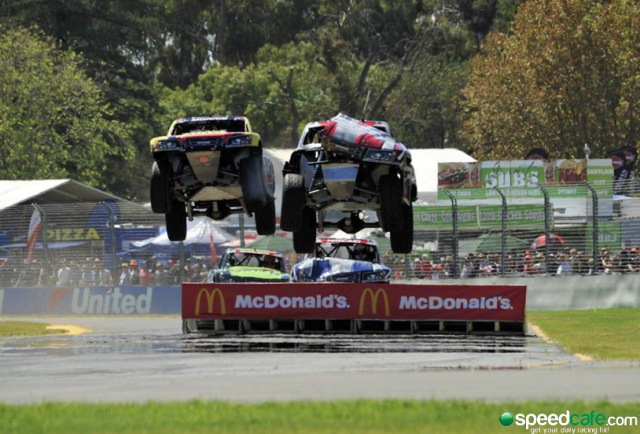 Morris and Adelaide winner Sheldon Creed at the Clipsal 500

The duo will drive with UFD Racing alongside team owner Bill Hynes, who also competed at last weekend’s Clipsal 500 Adelaide.

Brabham is preparing for his sixth Super Truck appearance, while St Petersburg marks Morris’ first time racing the unique V8-powered beasts in the US.

The 2014 Bathurst winner has competed in each of the last four outings for the trucks in Australia, winning on debut at last October’s Castrol Gold Coast 600.

The Morris and Brabham names are synonymous with one another following the former’s stint as a team-mate to Matthew’s father Geoff in Australian Super Touring during the 1990s.

Brabham is using the St Petersburg weekend to both continue his Super Truck campaign and work alongside IndyCar squad KV Racing.

The team, which runs a single full-time IndyCar for Sebastien Bourdais, will field Brabham’s Indianapolis 500 entry in May under the banner of Pirtek Team Murray.

“I can’t thank Bill Hynes enough for offering up the truck this weekend at St Petersburg, it’s a great opportunity to be out there racing, particularly with IndyCar starting its series in town this weekend,” said Brabham.

“It is a perfect build-up for us, everyone is curious as to what the next step with Pirtek Team Murray is going to be and the next phase will become evident soon.

“St Pete is such a cool place to go race, the area is beautiful, it is Spring Break time at the moment, so the weather is awesome and there’s a bit of a party atmosphere around the event.

“The KV Racing Technology guys have been terrific and since arriving I’ve had the chance to sit down with Sebastien and look over data from the most recent test and really start that integration with the team.”

Pirtek Team Murray has been put together by Speedcafe.com owner Brett Murray for the Indy 500 and preceding Indianapolis road course event.