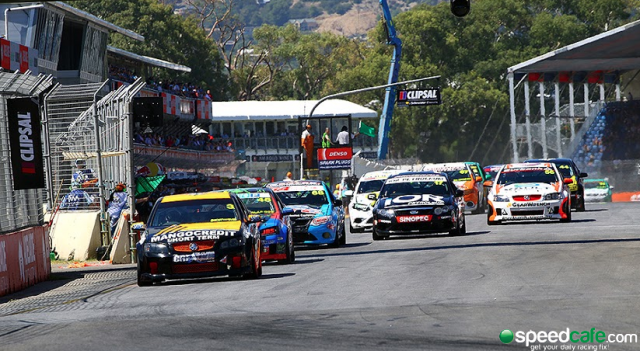 V8 Supercars has completed a deal with CAMS to take over the running of the V8 Ute Racing Series for the remainder of the 2016 season.

The Ute Racing company, which contracted Spherix to administer the category, was put into voluntary administration as franchise holders looked to exit the series.

V8 Supercars has now confirmed that the Utes will complete their full eight round schedule following the new CAMS agreement.

“We have made no secret of our desire to manage the category long-term,” said V8 Supercars CEO James Warburton after 17 Utes took to the track in Adelaide.

“It’s been a very professionally run series for many years and we are keen to develop it in a new direction and ensure its continued success for years to come.

“The V8 Utes provide an action-packed, high-octane brand of racing that aligns perfectly with our core brand principles.

“It’s a great fit, and a fantastic support category loved by fans nationwide.”

CAMS CEO Eugene Arocca says he’s pleased V8 Supercars has taken control of the category and is confident the group will devise a concept to safeguard its future.

Competitor uncertainty surrounding the direction of the series led to the exit of several teams ahead of the new season.

Last year V8 Utes joined forces with V8 Supercars to devise a next generation Ute to replace the current Holden and Ford models, but a firm resolution is yet to be found.

“Our arrangement with V8 Supercars is that they will put 2016 away which is what they committed to and then will look for a longer term engagement,” Arroca told Speedcafe.com.

“We believe it is a great category and we want to see it continue to evolve give the Holden/Ford situation we are facing.

“We are extremely happy that V8s have stepped in and we will be talking to them about 2017 and beyond.

“Discussions at the moment are about making sure the category gets through to the end of 2016 and during the course of the year I am confident James Warburton and Shane Howard will look at how they can evolve the Utes category for the future.”

The V8 Utes will head to Symmons Plains for the second round of the series from April 1-3.