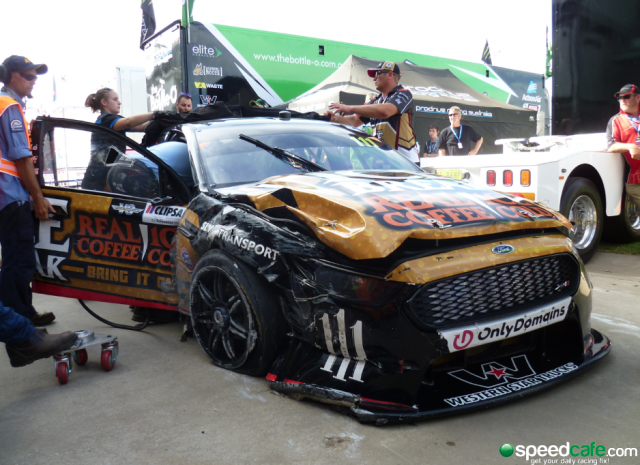 Pither’s campaign came to an abrupt end when he understeered into the outside wall at the 210km/h sweeper while running close behind another car on the second lap of Race 2.

While the initial contact was relatively minor, the Super Black Ford’s steering is said to have been broken by contact with a metal access gate as the car slid down the concrete wall.

With no steering, Pither then careened into the inside concrete wall at the exact point where a second access area was located.

The second contact did the bulk of the damage, leaving Pither to be switched into one of the squad’s Dunlop Series cars for Albert Park.

Prodrive team manager Chris O’Toole told Speedcafe.com that he has submitted recommendations to FIA safety delegate and V8 Supercars race director Tim Schenken in the wake of the incident. 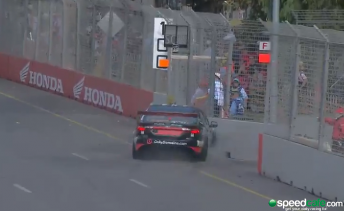 “The initial hit was relatively minor, but when it slid down the wall it got to the armco access point, which was jutting out about 20mm,” confirmed O’Toole.

“That’s broken the steering completely off it and from that point forward he had no control, which is why he ricocheted across the other side of the road.

“The cutaway on the right-hand-side doesn’t need to be there. No one pulls the cars back into that opening when they’ve crashed at Turn 8, they take them off at Turn 9.

“If they have to have the swinging gate on the left, it must be completely flat and flush with the concrete so that a car can run down there and not get tripped up by it.

“I’ve put the in-car footage, together with an explanation of what my suggestions would be, to Tim Schenken to review it from a safety point of view.”

Although left with a heavy repair job on the Super Black Falcon, O’Toole says he was relieved to see Pither walk away uninjured.

“I honestly believe that if a lesser car, like one of those Porsches or GT cars, had the same accident you’d probably have an injured driver,” he said.

“We’re lucky that our cars are full cage cars, rather than a cage inside a road car. It’s a significant safety issue that doesn’t need to be there. It needs to change.”

Prodrive is confident of having Pither’s crashed car repaired by the time the Dunlop Series returns for its second round at Phillip Island in mid-April. 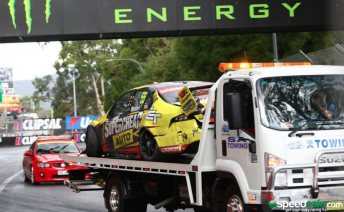 Mostert’s car will be back on track at Albert Park. pic: Peter Bury

The team will meanwhile have Chaz Mostert’s Adelaide chassis back on track at Albert Park next weekend despite it also having come to grief at Turn 8 on Sunday.

Mostert’s new Falcon suffered damage to its left-front steering and suspension during an initial hit on the left-side wall.

Unaware of the extent of the damage, the former Bathurst winner began accelerating again on the way to Turn 9, before spinning into the concrete at the hairpin with the left-rear.

“It was very superficial under the bodywork,” said O’Toole of the damage to the Supercheap Ford.

Next Story Doohan, Jones added to Hall of Fame list