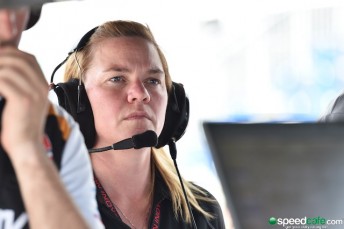 Former team owner and racer Sarah Fisher will serve as the Pace Car driver for the bulk of the 2016 Verizon IndyCar Series season.

Fisher will take command of the field in 14 races while veteran Johnny Rutherford will be in charge of the Pace Car when IndyCar makes its long awaited return to Phoenix while he will also pace the field at the 100th running of the Indianapolis 500.

“Having worked with JR (Rutherford) when I was a rookie (driver), and to follow in his footprints now is just an incredible honour,” Fisher said.

The move follows Fisher and her partners Wink Hartman and Ed Carpenter’s decision to disband their CHF Racing team this season.

“I’ve lived for the sport of IndyCar racing and when Jay Frye (IndyCar president of competition and operations) offered me the position to pace the field, I didn’t think twice about my commitment again to the sport that I love.”

Fisher became the youngest female driver to compete in the Indianapolis 500 when she qualified for the race at age 19 in 2000.

She was the first woman to win a pole position for an Indy car race, when she qualified fastest for the 2002 Belterra Casino Indy 300 at Kentucky Speedway, with a lap that remains the fastest at that track.

“Sarah’s been an integral part of IndyCar as both a driver and a team owner and having her in this role is a tremendous asset to the Verizon IndyCar Series,” Frye said.

The IndyCar Series season starts with the Firestone Grand Prix at St Petersburg, Florida, this weekend.