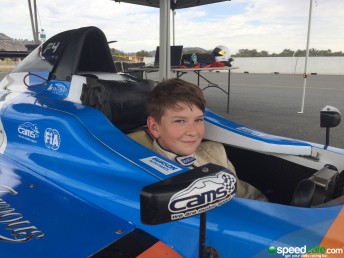 The 15-year-old from Dubbo, New South Wales has inked a two-year agreement with the team following a successful test at Wodonga.

The former Rotax Pro Tour karter will fill one of the seats at Junior Racing Development who acquired two Mygale chassis in January.

Everingham is the fourth driver to officially announce plans to contest the series following Brenton Grove and Will Brown, who will drive for Team BRM, while Jack Smith will race for AGI Sport.

“I can’t wait to get into testing and the championship,” said Everingham, who has taken up CAMS’ new $50,000 F4 scholarship.

“This is the start of a two-year program for me in Formula 4 so I will use 2016 to learn the car and circuits in preparation for 2017.

“Naturally I would like to take home the Burson Rookie of the Year prize, but I have no real expectations other than learning as much as I can.”

Next Story VIDEO: Doohan and Jones join Hall of Fame