Dumbrell celebrates with his team in Adelaide. pic: Ben Auld

Lucas Dumbrell says that a maiden V8 Supercars victory for his eponymous team at the Clipsal 500 is a key milestone in ongoing efforts to shake the squad’s minnow tag.

Lucas Dumbrell Motorsport debuted in the championship as a one-car team in 2010, little over 12 months after a Formula Ford crash had left the then 19-year-old as a quadriplegic.

The squad has endured a tempestuous history to date, finishing no higher than 18th in the championship amid frequent driver, staff and structural changes.

Having thrown himself into the management position, Dumbrell admits that there have been times when he questioned whether the team should continue.

The youngster’s efforts have, however, enjoyed ongoing support from Dumbrell’s highly successful businessman father Garry, as well as the likes of Holden Motorsport and recent sponsor Phil Munday. 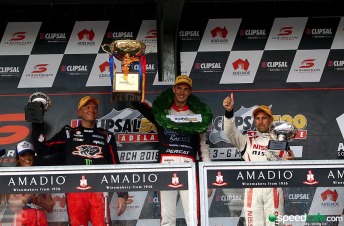 The South Australian, who drove masterfully to the team’s win in wet conditions on Sunday, is the first driver to continue with LDM for a second full season.

“It’s not an easy gig (running a team), it’s heaps and heaps of work.

“When I started I had very little business knowledge, but it’s obviously a people-driven sport.

“Winning is awesome for the whole team and really repays all the time, effort and money that I’ve put in.

“For the team it’s a passion, not a job. They don’t come here for a pay cheque, it’s not a big dollar job. These are the things that make it worth it.

“It’s nice to repay my family as well who have supported me over the last few years.

“There have been some really trying times where you think ‘this is not worth it’, but this makes up for all of that time, the headaches and long days.”

Although the team showed flashes of promise last year under the leadership of new-for-2015 manager Barry Hay, Dumbrell knows there is more work to do in order to improve LDM’s reputation in the paddock. 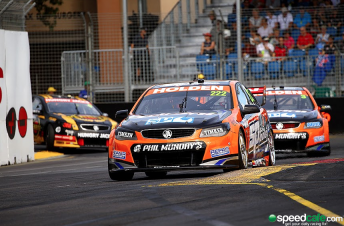 LDM currently has a two-race deal with SP Tools

The team has started the year with Hay engineering its second car after struggling to attract the right talent to work with Andre Heimgartner, whose deal was only signed in February.

Percat’s victory also came on a chaotic day where fuel strategy – including a controversial pitstop while confusion reigned over whether the race had officially started – proved a critical factor.

The day prior had seen Percat fail to even start the second race after the embarrassing combination of his car’s bonnet flying up and a battery failure stopped his car on the way to the grid.

“You never want to be the minnow or the backmarker,” said Dumbrell of his team’s position in the paddock.

“We’ve definitely had some up and down stages. It’s so much about staff, like any business.

“We’ve had a few different people here and it’s all about finding the right ones who mix and gel together.

“I think we’ve got a good bunch at the moment. We’re not perfect, but we’ll do the best job we can.

“Results like this will hopefully raise opinion of the group of guys we’ve got here.

“Some people are perceived as not good, but they’re only as good as the working environment they’re in.”

The victory also comes at a time when LDM is chasing naming rights sponsors for both cars, which are currently on a two-event deal with SP Tools. 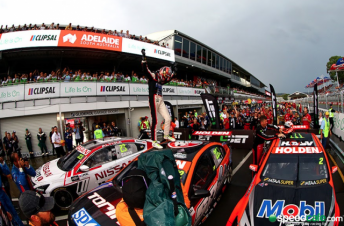 Hay hopes that Percat’s win will lift the team

“This will hopefully be a boost looking at the potential partners that want to come onboard,” he said.

“It shows what we can achieve.”

While the Clipsal 500 was a maiden victory for Dumbrell and much of his team, it added to Hay’s impressive resume that includes a string of victories at Stone Brothers Racing last decade.

Hay expects his staff to gain extra motivation from their first taste of V8 Supercars success.

“It is huge,” beamed the excitable engineer and manager, who guided Russell Ingall to the 2005 championship with SBR.

“Down this end of pitlane you work hard, you have more restrictions with budgets and parts and what you can and can’t do.

“When you do get there it is even more rewarding because it is such a slog. I’m sure winning at Triple Eight or HRT is special but when it comes down this end of town it is extra special.

“The team will be walking on clouds for the rest of the year now.

“Winning races is addictive. You do whatever it takes to win to get that next hit.”