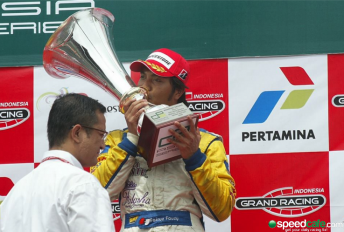 The new promoter of the Kuala Lumpur V8 Supercars race has started moves to enable a well-known Malaysian driver to enter the inaugural championship race as a wildcard.

Fairuz Fauzy is being sought for a guest appearance in the four 100km races on the street circuit which features the iconic Twin Towers as a dramatic back drop.

Head of the new group which has taken over the promotion of the renamed KL City 400, Faizal Moulana confirmed to Speedcafe.com that Fauzy, known locally as ‘Fast Fairuz’, is being targeted for a surprise start.

If the plan comes off, it would see one of the bigger teams possibly field the entry for Fauzy.

The 33-year-old has gathered a wealth of experience over the years having spells in GP2 and roles as test driver at the former Spyker (now Force India) F1 and Lotus teams.

He has spent several seasons in the former A1 GP and Renault 3.5 Series.

“We are talking to V8 Supercars to see whether he can be a wildcard driver for the event,” Faizal told Speedcafe.com.

“So we are looking at a program to build future drivers in V8 Supercars which is in play.”

If the plan comes off he will be the second Malaysian to drive a V8 Supercar after ex F1 driver Alex Yoong drove for one-time team owner Craig Gore in 2004.