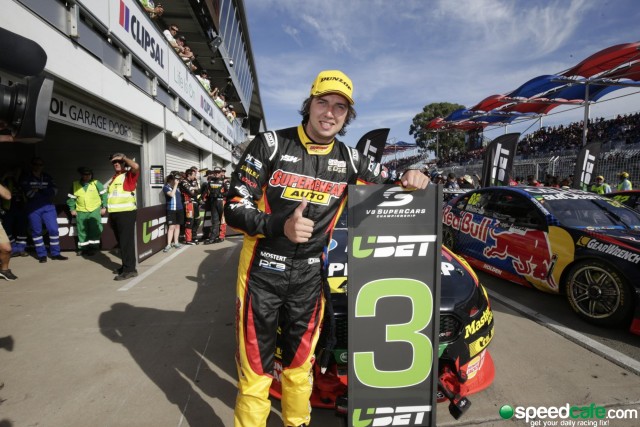 Chaz Mostert celebrates a podium on his return to V8 Supercars

Chaz Mostert is focussing on the positives following an eventful return to V8 Supercars that ended with a crash at the Clipsal 500’s infamous Turn 8.

The Prodrive Racing driver showed impressive pace in his first competitive outing since his horror accident at Bathurst last October which left the Queenslander with a broken leg, wrist and knee ligament damage.

Mostert soared to a stunning pole position and third place finish in Saturday’s second 125km heat after finishing 16th in the day’s earlier race having been compromised by strategy.

After qualifying second for Sunday’s final 250km leg, his weekend ended on a sour note when he hit the wall at the Turn 8 sweeper during tricky wet conditions.

Despite Sunday’s accident, Mostert admitted it had been an emotional weekend with the Prodrive man relieved he was able to deliver front running pace.

The 23-year-old emerged from the weekend 22nd in the points standings, having been hit with a 15-point penalty for contact with Nissan’s Rick Kelly at Turn 9 during Sunday’s race.

“It was a disappointing finish to a really strong weekend,” Mostert told Speedcafe.com.

“I’m going to keep focussing on the positives. I got a pole position and the car was going well in the dry.

“We don’t have many points but it is still very early days. Hopefully we can get this bad one out the way and push on.

“I’m pretty emotional about it to be honest. To come from that (injury) and still be competitive is just awesome.

“I’m so grateful to everyone who has helped me over the last five and half months (from) physios, surgeons and nurses. It is a credit to how they looked after me and that is why I have bounced back a lot quicker.

“It is a massive relief. You never know how you are going to go until you get back out there. I’m super pumped and ready to have a another good season.”

The #55 Falcon FG X sustained damage in the Turn 8 incident but the car is set to be repaired in time for the non-championship Australian Grand Prix support races from March 17-20.