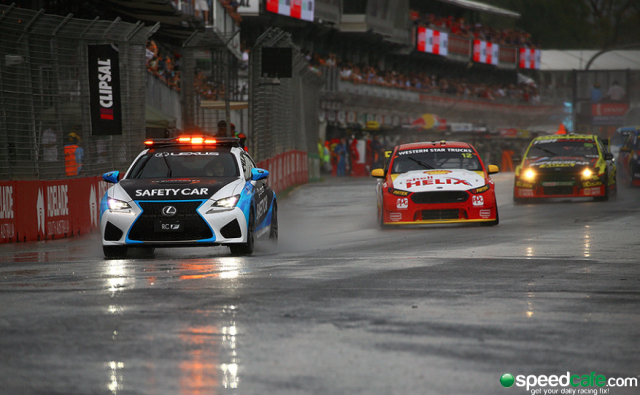 The Safety Car leads the field during the early stages

Sunday’s race kicked off in embarrassing circumstances for the category with teams uncertain if the race had actually started when the Safety Car pulled away from the grid.

The unusual situation had arisen after heavy rain on the warm-up lap and a crash for Aaren Russell required a delayed start and a decision to start under the Safety Car. The Safety Car eventually led the field away in what some had thought were ‘sighting laps’ before the race would be officially started.

Others, led by Prodrive’s Mark Winterbottom, immediately pitted and began taking on the first portion of their 140 litre compulsory fuel drop, raising eyebrows among rivals.

Central to the confusion was the fact that the race timing was not activated until more than a lap had been completed under the Safety Car.

Dutton and Nissan’s Perry Kapper were soon seen in pitlane requesting clarification from V8 Supercars’ technical director David Stuart, who referred the matter to the stewards.

A message stating that ‘the race has started’ was eventually added to the timing screens, but only after a host of cars – including the eventual top two finishers Nick Percat and Michael Caruso – had joined Winterbottom in pitting.

V8 Supercars has today confirmed that it is reviewing its starting procedures as a result of the unusual scenario.

“I had a good chat with Bargs (Investigating Officer Jason Bargwanna) and the CAMS stewards post-race,” Dutton told Speedcafe.com.

“I understand that the rule is a bit poorly written, so they had to make a call on it. I don’t begrudge them for that.

“The only thing is that a bit better communication could have helped. It didn’t come out early enough that that was the rule they were taking.

“It’s a funny one that, I don’t know why the other guys thought to stop. Winterbottom came in on lap 0. The lap count hadn’t started.

“Others who came in, I understand, even though it wasn’t perfectly clear they just played it as they saw it.

“It’s a tough one, but as the CAMS guys said, it was a strange situation and they needed to make a call.”

Pointing to the rulebook while with Stuart in pitlane, Dutton had initially been adamant that the race should not be considered to have started until after the Safety Car was withdrawn.

“Their interpretation was that because the race had had the warm-up lap (before the delayed start), it was different (to a normal Safety Car start procedure),” he explained.

“As soon as the cars drove off, it had started. It’s not an easy job for them. I understand the call they made.

“The only thing would have been that, when the cars pulled away, if they were thinking that was the start of the race then they should have just said ‘for clarity, the race has started’ because the timing hadn’t started yet either.” 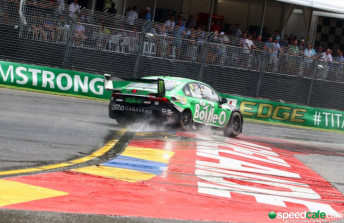 Winterbottom was one of several to pit during the confusion. pic: Peter Bury

Prodrive team manager Chris O’Toole told Speedcafe.com post-race that he had directly confirmed with Race Control that the race had started before pitting Winterbottom.

“As far as we were concerned it was clear what was going on,” O’Toole said.

“The green light came on and we all started the race under the Safety Car.

“Before we even pulled into pitlane we had complete confirmation from Race Control that the race had started.”

“It was hard to know what was going on, it was extremely confusing and at the time we thought they (Race Control) made a mistake,” Burgess told Speedcafe.com.

“In the rule book there’s various scenarios but the one that rolled out isn’t covered properly.

“I had a chat with the stewards and they explained what they did, how they came to be in that position and that they made a call.

“I think we as a category should be talking about it, understanding the chain of events and if the rulebook caters for it and what we can do better to learn from it and make it less confusing for us and the public.”

Team owner Brad Jones says that the issues, along with the fuel drop scenario that also caused significant debate, will be discussed by the V8 Supercars Commission at its next meeting.

“It’s very difficult from the teams’ perspective to get it right all the time and I think what Race Control learnt is that it’s also difficult from their end,” Jones told Speedcafe.com of the scenario that unfolded.

“They got a bit of a snapshot about what it can be like for us sometimes and I’m not sure that’s a bad thing. 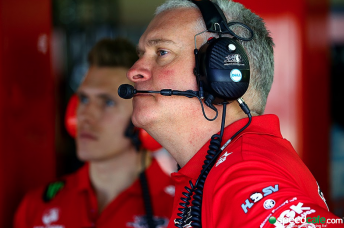 “For us (at BJR), we had a little discussion about it and felt that, even though there was a mix-up with the timing and it was confusing, the race had started.

“But we didn’t bring our car in at the first opportunity because we were still unsure and thought it better to play it safe.

“The Commission will certainly be discussing some of this stuff next time we meet and the teams will take something away too,” he added.

“If things happen once, it’s excusable and manageable.

“But what we need to take away was that, the things that were really bad and confusing, especially for the fans, that we make it clear so that next time it’s not like this.”

While stressing the difficulty of the conditions, V8 Supercars CEO James Warburton confirmed via a statement that the starting procedures are officially under review.

“Sunday’s race was an extreme weather event,” he said.

“It was trying for everyone and the focus was on starting and conducting a safe race for our drivers, teams, officials and fans and adjudicating the rules that were in place when the race started.

“It was complicated by the race being red flagged after a marshal was affected by lightning. While we do everything we can to put on the best show for our fans, the safety of everyone concerned including drivers, teams and officials is paramount.

“We have already commenced a review of start procedures under conditions experienced on Sunday.”