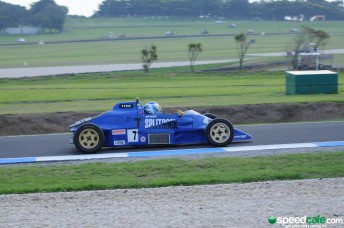 A bumper 54 car grid of historic Formula Fords has been assembled for this weekend’s Phillip Island Classic.

The impressive Historic Formula Ford contingent will feature among the 540 plus cars entered across 12 categories for the annual meeting at the Victorian circuit.

Joining Blanchard on the grid is the 1982 British Formula Ford champion Rick Morris, who is set to race Andy Nethercote’s Reynard FF87.

Expat Don Boyack and Ireland’s Jennifer Mullan are also making the trip from Europe to contest the meeting.

In terms of local entrants, 1988 ‘Australian Driver To Europe’ champion David Roberts returns after a 28-year sabbatical to drive a Swift FB89 with Ellery Motorsport.

The Historic Formula Fords will contest five races beginning on Friday before concluding on Sunday.

The category will join an extensive program featuring races for historic Formula 1 and Formula 5000 machinery alongside an array of classic touring cars.