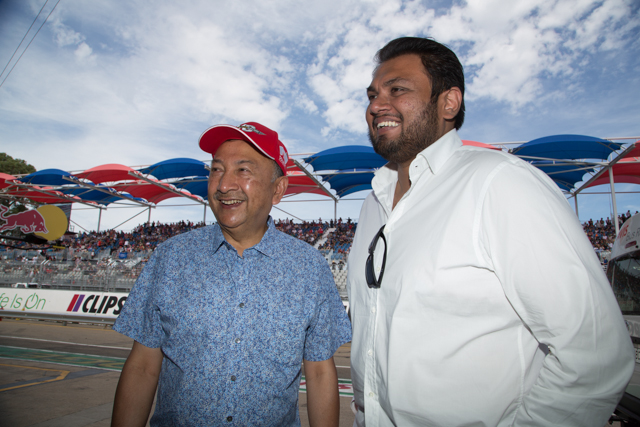 HRH Tunku Naquiyuddin, the Royal Patron of the KL City 400 with City Motorsports chief executive Faizal Moulana at the Clipsal 500

The new promoter of the first V8 Supercars Championship race on the Kuala Lumpur street track is seeking more events for the series in the south-east Asian region.

City Motorsports has taken control of the KL event which will see V8 Supercars enter a five-year agreement in the Malaysian capital after the original shorter contract with the initial stakeholders was dissolved.

Faizal, who formerly worked for the government, heads up the City Motorsports organisation which has assumed sole control of the race this year.

“This (KL) is part of expansion for motorsports we have planned in the region,” Faizal, who led a 10-strong delegation to the Clipsal 500, told Speedcafe.com.

“This is the real deal, having the 26 cars down for a championship event.

“But we would like to crawl before we run. We want to ensure we have a good pilot in the KL event.

“We are talking to James (Warburton) in terms of a partnership in the region.

“My personal feeling is that V8 Supercars needs to grow in this region.”

After a period of inner turmoil the new promotional group has assurances from the Government that the V8 Supercars street race from August 12-14 will see out its five-year term.

The circuit is set to undergo major improvements in safety while the V8 Supercars will have a fully functioning paddock area close to the iconic Twin Towers.

“Last year it was heavily underwritten by the government but this year’s model will be more of a public/private partnership,” Faizal said.

“We assure the sponsors and hopefully the fans that the race will go on.

“We don’t expect to be profitable in the first year. It is still an event for the people.

“We have a permanent circuit at Sepang since 1999 but the KL City 400 is a street circuit right in the heart of Kuala Lumpur.

“This (KL City 400) is part of our vision to increase our economic benefits for the city.”

Faizal said V8 Supercars will take on a greater role in the event’s infrastructure.

The Sepang International Circuit supplied a lot of officials for the inaugural event with Faizal saying it was his preference to continue the partnership.

“As far as SIC goes, they offered their services last year,” Faizal said.

“But this year with V8s coming full force with all the resources they need, it could be a duplication like last year but we are trying our best to merge and have them participate.

“I’m not saying we don’t want to work with them. We will and we want to.”

A number of properties within the track precinct have become vacant which has boosted logistical potential while 3,900 grandstand seats will be available alongside a general admission structure and corporate hospitality.

Yet-to-be-released ticket prices have been benchmarked against the Gold Coast 600, Sydney 500 and the Singapore Formula 1 Grand Prix.

Off-track entertainment will include a major international act which would be held at Merdeka Stadium about 1.5km from the circuit.