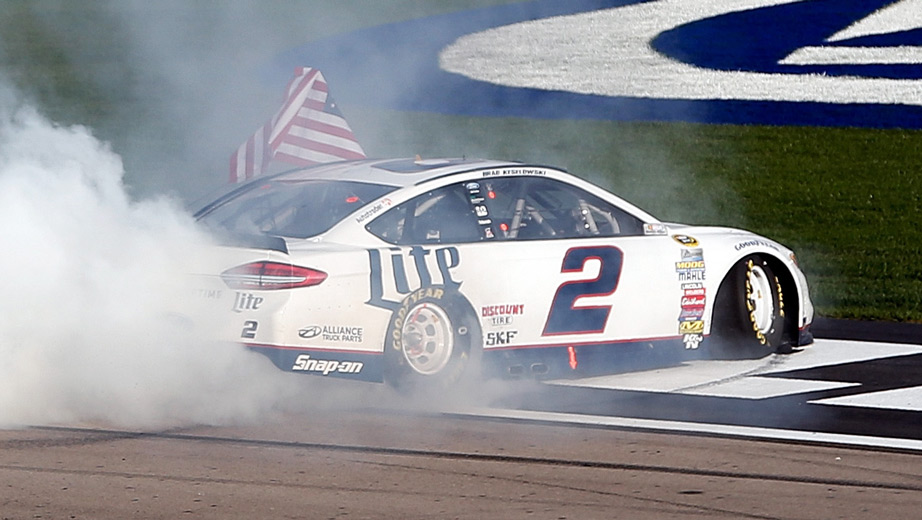 A fast finishing Brad Keselowski has scored his first win of the NASCAR season with victory in Las Vegas.

On a gusty day, which included a minor dust storm, Keselowski pulled past Kyle Busch with six laps to run to earn his 18th career win.

Keselowski had to first make his way by Penske team-mate Joey Logano with 10 laps to run before hauling-in Kyle Busch. Logano ended up second with Jimmie Johnson in third. Busch confirming that he had a wheel vibration through the final period of the race as he finished in fourth.

The win all but guarantees Keselowski a spot in the Chase joining Denny Hamlin and Johnson.

“This is really, really great. It seemed like there were plenty of challenges, whether it was pit road or the weather or cautions,”said Keselowski.

“They threw everything they had at us today but this Miller Lite Ford team was too strong and we were able to fight them off and get to victory lane.”

As well as the windy conditions, which on occasions brought heavy films of dust across the speedway, the other major incident occurred with 43 laps to run when Matt Kenseth got loose and his spin soon involved pole-sitter Kurt Busch, Chase Elliott and Carl Edwards.

It was the ensuing caution which led to the long run to the chequered flag.

NASCAR continues on the western side of the US next week with Phoenix the next stop.