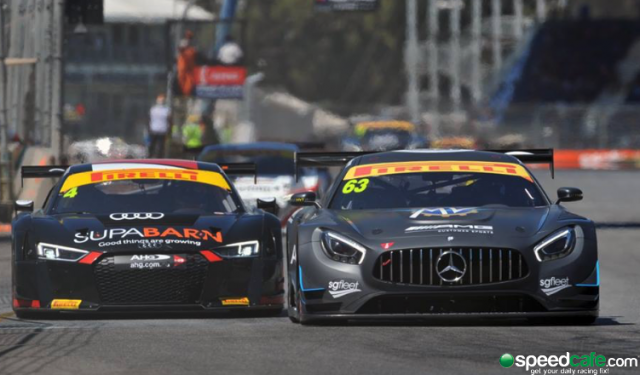 Peter Hackett has been heavily fined and excluded from the opening round of the Australian GT Championship at the Clipsal 500 Adelaide.

CAMS has confirmed to Speedcafe.com that the Eggleston Motorsport driver has been handed a $20,000 fine, $10,000 of which has been suspended until the end of the year.

Hackett was deemed to have breached championship rules 183 section 9 that states ‘any action which causes or is likely to cause damage to other persons or property’.

The penalty refers to an incident in Sunday’s Race 3 when Hackett misjudged his run to Turn 9.

As a result his new Mercedes AMG GT3 ploughed into the side of second placed Audi R8 of James Koundouris putting both cars out of the race.

Hackett admitted fault for his role in the crash which blemished his return to the category for the first time since 2013.

The incident was one of a several that punctuated the three 40 minute races on the Adelaide streets.

“At Turn 8 I saw where the Audi was and then Tony Quinn (McLaren) moved over in the braking area and I thought he was overtaking the Audi, so I went down the inside to overtake both of them,” Hackett told Speedcafe.com.

“I was unsighted to see exactly where the Audi was and it turned in as is its right. It was completely my fault.”

Hackett’s Mercedes AMG GT3 has suffered chassis damage which the team will assess to see if it can be repaired in time for the next round at the Australian Grand Prix from March 17-20.

The car is due to compete in the grand prix’s speed comparison event alongside the four 30 minute GT championship races.

“The speed comparison is the priority, we will try and get it repaired for that,” added Hackett.

“The damage is quite heavy. The initial analysis isn’t great but we don’t know until we get the car back to the shop.

“There is some chassis damage but we don’t know the extent of that.”

Koundouris’ Audi R8 also sustained heavy damage which will be assessed this week.

Next Story Miedecke returns to Aus GT with Matt Stone