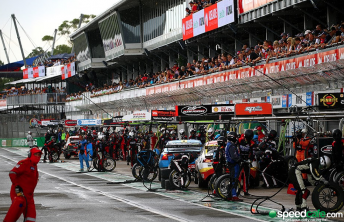 Pitlane action from the Clipsal 500

A frustrated Scott Pye has slammed Race 3 of the Clipsal 500 as a ‘non-event’ after both DJR Team Penske Fords fell foul of minimum fuel drop regulations in the rain shortened contest.

Podium finishers Pye and team-mate Fabian Coulthard were two of five drivers handed 60 second post-race penalties for completing the race without having taken on the required 140 litres of fuel.

The need to comply with the rule saw several others pit from front-running positions in the final moments before the race reached its time cut-off after just 48 of the scheduled 78 laps.

Those to pit late included Scott McLaughlin and Craig Lowndes, who dramatically pulled in from first and second on the road at the end of the penultimate lap to take their final fuel allocation.

“I don’t know how much of the race we completed in terms of a percentage but it is crazy to try and fit 140 litres of fuel in when we haven’t done enough laps,” Pye told Speedcafe.com post-race.

“It was physically impossible for us to fit it in because of the amount we chose to start with. That race, I don’t know how you can count it. It was a non-event.”

A minimum fuel drop has been a frequent requirement in the longer V8 Supercars races since the end of 2013, when the category introduced it to even up the economy differences between the two and four-valve engines.

Controversy over the fuel drop reigned from the outset on Sunday, where confusion as to whether the race had officially started under the Safety Car led to disagreements over the legitimacy of early stops.

Importantly, others later took full advantage of the fact that teams can ‘vent’ fuel through the cars in their pitstops as part of the minimum drop.

The practice sees the fuel flow out of the rig, into the car and back up the vent line, which subsequently gets drained by the team in the garage.

“Everyone was able to get the fuel in, you just had to come in and out of the pits,” Red Bull team manager Mark Dutton told Speedcafe.com.

“We pitted Shane (van Gisbergen) two or three times in a row. Under Safety Car he was using very little fuel, so we were just pitting him to fill up the vent line and sending him again.

“It’s not the way you normally do it (achieve the minimum fuel drop), but if anyone says they couldn’t do it, it’s a cop out.”

The Holden Racing Team pitted Garth Tander three times in succession under Safety Car prior to the red flag, helping him to eventually take third place.

Despite making the most of the current system, HRT team principal Adrian Burgess believes that the suitability of the fuel drop to wet races needs to be looked at.

“It’s not a real race, but it’s what we’re asked to do,” he said of the fuel drop process.

“Do we really need the fuel drop when we have a race like that? We probably don’t. Just let the guys up the front race hard in wet conditions.

“I’m sure when we look back on it and analyse it we’ll come up with a better process and amend a couple of rules to cater for what went on.

“That’s what we should do and if we don’t it’ll be disappointing.” 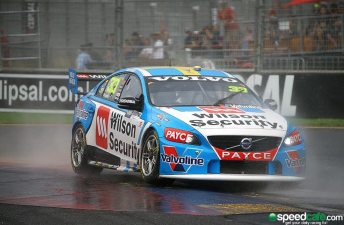 “We all know what we’ve got to do with the fuel drop,” Jones told Speedcafe.com.

“What made it confusing were the terrible conditions, but almost all the teams knew what they had to do to get to the end.

“The thing about the fuel drop is that when it’s dry, it stops us from running really lean cars. It’s more than just evening up fuel use between teams.

“You can’t start a race and say ‘it’s wet, so let’s throw that rule out’. Everyone is prepared for that rule.”

Several drivers looked somewhat bewildered in the paddock on Sunday evening due to the chaotic nature of the afternoon.

“It was the craziest race I’ve ever been a part of,” McLaughlin told Speedcafe.com after eventually being classified 12th.

“I didn’t know where I was or how it was going to play out. Even when we finished I still had no idea where I was.

“It was pretty tough because we ran up the front, stayed out of trouble and just because we didn’t come in earlier (to do the fuel) our race was ruined.”

“It was just a bizarre race to be in,” added Lowndes, who emerged from the pits on the final lap to follow McLaughlin home in 13th.

“The guys in the pits were focussed on the fuel and I was just trying to read the weather and the tyres.

“I didn’t know where we were, we were in and out so many times.

“It was a good feeling when Ludo (Lacroix, engineer) told me we were leading, but it was always artificial because we had to do that extra stop.”