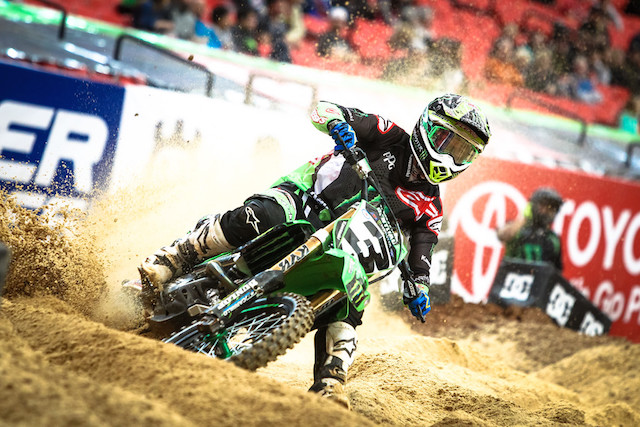 Eli Tomac and Jeremy Martin have emerged victorious during round nine of the Monster Energy AMA Supercross championship held on the infield at the Daytona International Speedway.

Tomac dominated throughout the day, earning the fastest qualifying time, a heat race win and fended off defending champion Ryan Dungey for his first main event victory of 2016.

Australia’s Chad Reed struggled during the Daytona round, having to qualify for the main event through the Last Chance Qualifier (LCQ) and giving him a poor gate pick by virtue.

In the 250 class, title hopeful Jeremy Martin of the high-profiled Star Racing Yamaha outfit was the eventual winner of a four-rider slobberknocker as factory teams of each colour went to war.

It was Geico Honda’s Malcolm Stewart who grabbed the holeshot, with Martin right in tow from the beginning.

As Stewart and Martin squabbled at the front for sole ownership of the race lead, current points leader Martin Davalos and Troy Lee Designs KTM speedster Justin Hill capitalised on the back and fourth and made themselves part of the lead battle by the five lap mark.

From there, multiple passes occurred before Jeremy Martin’s fitness prevailed and guided him to his first victory of 2016.

Justin Hill sliced his way through to finish second, with Martin Davalos making a last lap pass on Stewart to take third.

Stewart finished fourth with Aaron Plessinger, who was sick the week leading up to the event, put in a valiant performance to finish fifth.

It was another disappointing run for title favorite Tyler Bowers who struggled with a ninth aboard his Monster Energy/Pro Circuit Kawasaki, followed by Troy Lee Designs KTM’s Shane Mcelrath in tenth.

Dungey once again extends his championship lead to 213, trailed by Roczen with 174 and Jason Anderson with 163.

Davalos continues to lead the 250 East Coast series with 45 points, followed by Daytona winner Martin with 43 and Stewart with 40.

The series now heads north of the border to Toronto, as the Rogers Centre hosts round 10 of the Monster Energy AMA Supercross championship.

Next Story Roczen, Hill on top in Toronto supercross