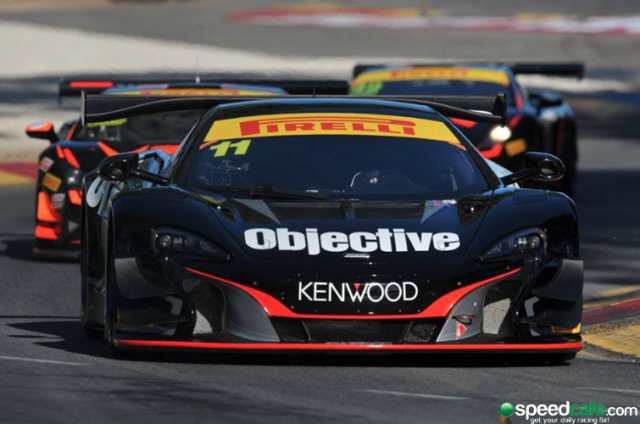 A final lap lock up from Roger Lago handed Tony Walls victory in a drama-filled Australian GT race at the Clipsal 500.

Lago seemed on course to record his second win of the weekend when an error on the last lap saw him miss his braking spot and run down the escape road at Turn 4 ending his race.

Once again it proved to be an eventful race with the Safety Car called on the opening lap when Peter Hackett’s new Mercedes AMG GT tagged the James Koundouris Audi R8 at Turn 3 putting them both out the race.

The Darrell Lea McLaren of Klark Quinn was also damaged in the incident.

Lago led the field prior to the caution from the Tekno McLaren 650S of Jonathon Webb and the Mercedes AMG GT of Craig Baird.

A hard charging Baird soon found himself in the lead shortly after the restart following moves on Webb and Lago.

Aided by a shorter compulsory pit stop time Lago rejoined the race in second, with Baird handing the Mercedes to Scott Taylor with a comfortable lead.

However, a brush with the wall at Turn 1 allowed Lago to catch and pass Taylor for the lead.

Once in front Lago seemed in control before the final lap drama which ended his race when he hit the wall while attempting a flick spin to recover.

This lifted Walls and Wood, who both passed the struggling Taylor, into first and second.

Wood pushed Walls hard on the final but the McLaren driver just held on to claim the win.

Solomon’s run to third was not without incident as the Mercedes driver tagged Greg Taylor’s Audi into a spin late in the encounter.

Meanwhile, Dean Canto brought the Lamborghini he is sharing with Andrew Taplin to fourth, ahead of the Aaron Tebb/John Martin Porsche, which started from 25th on the grid.