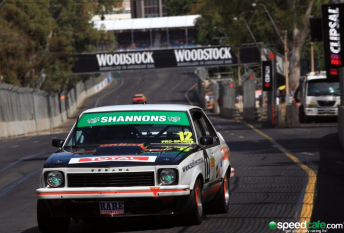 The 16-year-old Tasmanian reacted best from the reverse grid to move into the lead, but the race was only a few seconds old when the Safety Car was deployed.

A wild spin from Leo Tobin on the run to Turn 1 saw the heat neutralised for three laps.

Garwood (Holden Torana) made no mistakes on the restart to hold onto his lead before going on to take the chequered flag by 3.2 seconds.

The Holden Monaro of Nigel Benson was fourth ahead of Wayne Mercer’s XY Falcon.

John Bowe was the first of the weekend’s front runners in sixth, while double winner Greg Ritter had to settle for 13th position.

David Sieders has held on for another race win and the opening round victory in the V8 Utes Series in Adelaide.

The Race 1 winner swept into the lead and built a margin exceeding 1.3s with two of nine laps remaining, but was forced to defend at the final corner as Nathan Pretty closed in.

Pretty had squeezed by Ryal Harris through the terraces on the opening lap before elbowing past Craig Dontas on Lap 3.

Sieders leads the series by 16 points ahead of Round 2 at Symmons Plains (April 1 to 3).

Brendon Pingel kicked off his title defence with a round win after claiming Aussie Racing Cars Race 4.

Pingel threw car #1 into the first corner to clear fellow front row starter Craig Woods, lurching across the Senna Chicane, and repeated the feat upon the Lap 5 restart.

The Safety Car had been brought out for the stricken David Sultana, who had taken out Adam Casuccio at Turn 9 on the second lap.

Woods eventually gained the upper hand in the battle for second, passing James Duckworth on the final lap after Duckworth had passed him just before the stoppage.

Duckworth just beat Ben Walsh to the line for third in the time-certain finish, the race running only five of eight scheduled laps.

Round 2 supports the V8 Supercars Championship at Phillip Island from April 15 to 17.

Starting 11th, Creed worked his way to third by the Lap 4 competition caution, then passed both Burt Jenner and Toby Price on Lap 5.

Robby Gordon, starting 12th, was the coming man late in the race but ran out of laps and had to settle for second, ahead of 2016 Indianapolis 500 entrant Matt Brabham.

Matt Mingay experienced a number of incidents in addition to his violent roll the day prior.

The stunt rider nearly made a repeat performance when he slid sideways onto a ramp after contact with Toby Price exiting Turn 14.

He then had another coming-together with the 2016 Dakar winner at Turn 4 on the final lap, and a spin on his own at Turn 9.

Price finished seventh following a race which also saw him unloaded by Jenner while running second.

The competition continues in St Petersburg, Florida next weekend.