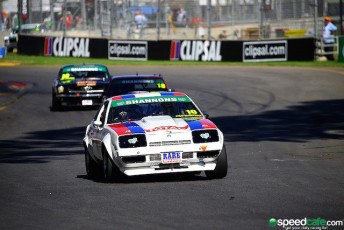 Greg Ritter eased to his second win of the Touring Car Masters weekend at the Clipsal 500 Adelaide.

The Chevrolet Monza driver briefly faced a challenge from John Bowe at Turn 1 before marching to the chequered flag with a 2.1s margin.

Eddie Abelnica inherited second position after a mechanical issue saw the demise of Jim Richards who followed Ritter for much of the race.

Bowe came through to finish third in a wounded Holden Torana after he clipped the tyre belt with his front at Turn 1 on the opening lap.

A strong run from Andrew Miedecke saw his Chevrolet Camaro claim fourth ahead of Glenn Seton, who ran as high as second before dropping down the order. 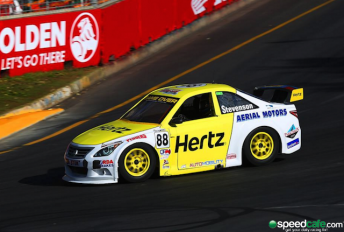 Lars Prokopec was the early leader in the handicap start, but was run down on Lap 3 by brothers Grant and Craig Thompson.

The Western Sydney Motorsport teammates in turn came under pressure from Chris Stevenson, who took the lead on the final lap after starting from handicap group two.

Grant Thompson crossed the line in second, ahead of Harley Haber and Craig Thompson.

Trent Young led the fast drivers who gave up a 20s head start from group three, threading a needle through traffic up to five cars wide to claim seventh.

Ryal Harris won from the front row of a reverse grid race which fizzled as a contest when a lengthy safety car period saw only two laps run under green flag.

Harris and Jeremy Gray ran side-by-side to the first corner, rubbing on the way into Senna Chicane before the 2015 champion emerged in the lead and never looked back.

Kim Jane necessitated the safety car at the commencement of Lap 2 when he skated into the Senna Chicane gravel trap amidst an apparent oil fire.

One lap remained when racing resumed, Harris leading Nathan Pretty home, while Race 1 winner climbed from seventh on the grid to fifth by the time of the chequered flag.

Burt Jenner won Race 2 but Matt Mingay stole the headlines with a spectacular roll-over in the Stadium Super Trucks.

Approaching Turn 14 at the end of the opening lap, Mingay got sideways and couldn’t stick the landing, instead rolling two-and-a-half times and shearing a wheel off the Hot Wheels/Castrol entry in the process.

Jenner, whom Mingay nearly landed on in the incident, went on to wage a ferocious battle with early race leader Toby Price, diving past on Lap 6 of 8 and going on to win by just over a second.

Price ultimately held out a fast finishing Robby Gordon, and was thrilled with his achievement.

“I wouldn’t have minded being passed by Robby Gordon,” said the Dakar Rally champion of the category founder.

“But to finish in front of him, I’m pretty damn pumped.”