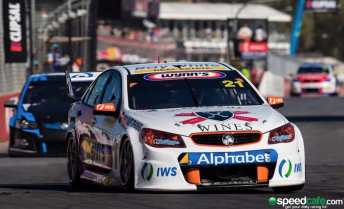 Josh Kean and Anton de Pasquale have both been handed 25 point penalties following a wild opening Dunlop Series race on the streets of Adelaide.

Kean, who led the race’s early stages, collected James Golding’s Garry Rogers Motorsport Holden as he recovered from a spin at the final corner in the closing stages.

The incident broke the steering on the Brad Jones Racing Commodore, pitching the South Australian into the wall at the Senna Chicane.

Series debutant De Pasquale was meanwhile found guilty of Careless Driving in an earlier incident with Macauley Jones on the way to an eventual eighth place finish.

The penalties following in-race drive-throughs for Adam Marjoram and Chelsea Angelo for contact with Taz Douglas and Kurt Kostecki respectively.

Full-time championship debutant Russell was already scheduled to start last in both races aboard his Erebus Motorsport run Holden.

Super Black Racing and Garry Rogers Motorsport were fined $2,000 each for using warm-up tyres in the evening’s meeting rides.