Pither ruled out of Sunday race after crash

Pither ruled out of Sunday race after crash 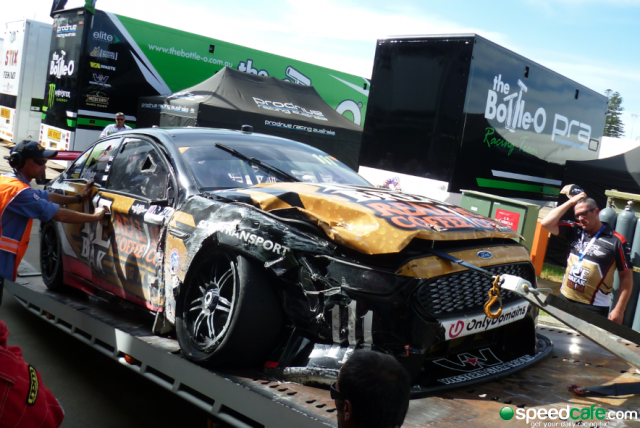 Super Black Racing has been ruled out of Sunday’s final leg of the Clipsal 500 Adelaide with the team requiring a spare chassis to compete at Albert Park later this month.

Chris Pither suffered a heavy accident on the second lap of Race 2 which saw the Kiwi glance the outside Turn 8 wall at speed before firing hard into the inside barriers.

The front of the FG X took the brunt of the second impact which has left the car with extensive damage that the team is unable to repair in time for the non-championship Albert Park meeting (March 17-20).

“Chris is physically fine, but the car is not, the shell wouldn’t even be able to be repaired for the Grand Prix,” Edwards told Speedcafe.com

“It is very severe damage. We have got a spare shell (for the grand prix).

“It just goes to show the integrity of these cars that it can withstand that level of hit.”

Pither apologised to his team for the accident, explaining that the first impact broke his car’s steering.

“I basically got a lot of aero understeer that I didn’t experience in Race 1,” he said.

“It broke the steering arm on the left and the second hit is the one that did the damage.

“I feel really sorry for the guys.”

Pither was one of two retirements from today’s second race, with Lucas Dumbrell Motorsport’s Nick Percat missing the start courtesy of a flat battery.

The local driver suffered the issue on the out lap from the pits to the grid. To make matters worse his bonnet came loose blocking his view.