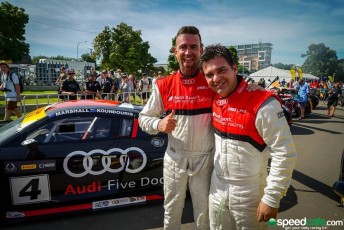 James Koundouris and Marcus Marshall came through to win an eventful second Australian GT race at the Clipsal 500.

The Supabarn Supermarkets Audi R8 emerged in the lead after the mandatory pits tops but was forced to endure a nervy two lap dash to the chequered flag following a late Safety Car.

A strong stint from Marshall, from ninth on the grid, placed the entry in a strong position come the pit stops, with co-driver Koundouris inheriting a comfortable 10 second lead.

However, his lead evaporated when a spin from Mark Griffith at Turn 12 saw the Safety Car introduced for a second time.

Despite coming under pressure from Geoff Emery in the final two laps, Koundouris held on to take the victory from the Jamec-Pem Audi, which stormed through the field early on courtesy of Christopher Mies.

Mies was involved in a controversial moment when he tapped race leader Nathan Morcom into a spin prior to the pit stops.

The opening race winner led the early laps before he was overtaken by Tekno Autosports’ Morcom after the first Safety car period. The McLaren driver came home in 15th position.

The first stoppage was caused by a multiple car incident involving Keith Wong, Rod Salmon and Aaron Tebb on the opening lap.

Meanwhile, Justin McMillan and Glen Wood brought their Lamborghini home in fourth ahead of the McLaren 650S of Tony and Klark Quinn.

Greg Taylor was sixth in his Audi R8 in front of the Egglesion Motorsport Mercedes AMG GT3 of Peter Hackett and Dominic Storey.

The top 10 was completed by Steve McLaughlan’s Audi, the Tekno McLaren of Jonathon Webb and Grant Denyer, and Tony Walls’ Objective Racing McLaren.

The final Australian GT race of the weekend will take place on Sunday at 0900 local time.