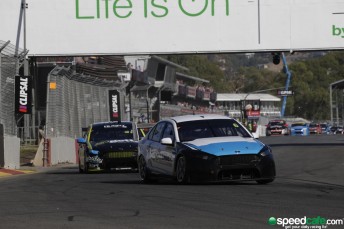 Prodrive Racing’s Garry Jacobson claimed a career first Dunlop Series pole position for the second race of the season on the Adelaide streets.

The former Eggleston Motorsport driver topped the times with an impressive 1:21.6s effort which arrived in the dying moments of an interrupted 15 minute session.

A flurry of times came in the final five minutes once the action resumed after Dan Day caused a stoppage when he came to halt on track.

Among those to improve was Garry Rogers Motorsport’s James Golding who claimed fourth ahead of the Brad Jones Racing duo of Andrew Jones and Macauley Jones.

Friday race winner Paul Dumbrell was the first of the older generation V8 Supercars in seventh, with the 2014 Dunlop Series winner sharing the fourth row of the grid with Josh Kean.

Kurt Kostecki, who led the session up until the red flag, was unable to improve leaving him in ninth.

The sister GRM entry of Richard Muscat completed the top 10.

The final Dunlop Series race of the Clipsal 500 weekend is scheduled for 1220 local time.