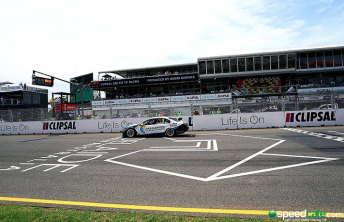 Garry Jacobson produced a faultless drive to record a maiden Dunlop Series victory and round win in another Safety Car affected encounter at the Clipsal 500.

The Prodrive Racing driver was shadowed by team-mate Jack Le Brocq for the majority of the race before he was passed by James Golding shortly after the first Safety Car restart.

Le Brocq was forced to settle for third after losing out to Golding, who produced an impressive move in the final laps.

The race ended under Safety Car conditions when Richard Muscat and Alex Rullo both found the Turn 8 wall in separate incidents once racing resumed after the second Safety Car.

Former Dunlop Series winner Paul Dumbrell provided most of the action in the race as he surged from seventh on the grid to third with moves on Macauley Jones, Andrew Jones, Todd Hazelwood and Golding.

However, his charge came to premature end when the Triple Eight V8 Supercars co-driver clipped the Turn 1 tyre wall and skidded down the escape road at Turn 3 on lap 9.

Shortly after the incident Renee Gracie brought out the Safety Car when she ran into the gravel trap at Turn 12.

Despite coming under pressure in the closing stages, Todd Hazelwood finished fourth ahead of Macauley Jones and Shae Davies in the first of the older generation V8 Supercars.

Josh Kean was involved in the only other incident of note when Kurt Kostecki punted him out of the race on lap 4.