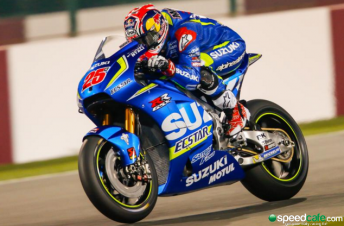 Maverick Vinales has put Suzuki at the top on the second day of MotoGP pre-season testing at Qatar.

Scott Redding and Hector Barbera were next with Andrea Dovizioso in sixth.

Lorenzo, Barbera and Dovizioso all concentrated on longer runs.

Marc Marquez was ninth with Aleix Espargaro completing the top 10 on his Suzuki.

Marquez began the test well but a spill at Turn 1 hampered his day although he managed to escape injury.

Aprilia’s Alvaro Bautista was 18th with Australian Jack Miller 19th on the Marc VDS machine which was 2.3s off the benchmark time.