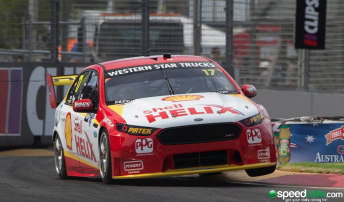 Scott Pye and Chaz Mostert scored a pole position apiece for Ford squads DJR Team Penske and Prodrive on the opening day of V8 Supercars action at the Clipsal 500 Adelaide.

Pye’s maiden pole came in the opening 10 minutes session on the soft tyres, while Mostert made a stunning comeback from injury with the fastest time in the hard tyre session.

There was elation for Scott Pye and DJR Team Penske as the South Australian nabbed the Armor All Pole Award for Race 1 in the dying seconds.

A 1:20.02s effort from Pye knocked Ford rival Mark Winterbottom from the top spot with the chequered flag flying, much to the delight of the American owned team.

Scott McLaughlin slotted into second before Jamie Whincup, on his second lap of his second run, knocked the Volvo from the front-row.

Winterbottom, James Courtney and Shane van Gisbergen completed the top six, while Todd Kelly, who set the pace on the first of the two soft tyre runs, fell to an eventual seventh.

The result however was all about Pye and DJRTP as the team starts its second season under its Penske guise.

“The podium at Pukekohe (last November) was the start of something good I think. The guys have worked so hard.

“It’s been a massive off-season, I’ve got my wish list and it’s all coming good. We’ve got to keep our heads down and work.”

Pye is this year working with engineer Adam de Borre, who had guided Mostert to a season-high 10 pole positions in 2015.

“It’s fantastic to start like that, it was beyond our expectations,” beamed De Borre.

“At the end of last year I didn’t think I was going to be here. It’s just unreal and I’m so happy for Scott and the whole team.”

Managing just 12th on the Race 1 grid, Mostert sprung a surprise when he shot to the top of the order after the chequered flag fell in the second session.

Courtney led the way for most of the hard tyre hit-out, running a 1:20.56s when choosing to do a second lap on his first set of rubber.

Whincup looked to have stolen the top spot when he moved 0.1s clear in the dying seconds, before Mostert trumped all comers with his 1:20.37s.

“I didn’t really see that coming, I just wanted to ease back into it,” said Mostert.

“The car felt awesome on the hard tyres, (but) we missed it a bit on the softs.

“It’s fantastic to come back and still be up the pointy end.

“I’m a bit lost for words, it feels like my first pole all over again.”

McLaughlin bumped Courtney to fourth in the final moments, while Van Gisbergen and Michael Caruso completed the top six.

Pye backed up his pole with a solid if unspectacular seventh, 10 places ahead of new team-mate Fabian Coulthard.

Reigning champion Winterbottom could manage no better than 10th.

A final practice session will take place tomorrow morning before the afternoon’s pair of 125km races.