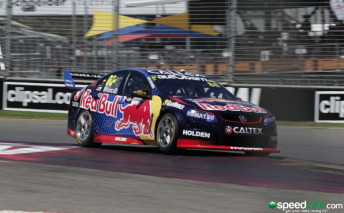 A new batch of soft tyres has added to the intrigue as V8 Supercars runs a dual-compound format at the Clipsal 500 Adelaide for the first time.

Drivers had their first taste of the street circuit on the softs during today’s practice and qualifying sessions ahead of a single 125km race on the rubber tomorrow.

The format leaves just a handful of laps to assess the tyres on the circuit prior to the race, where tyre life and strategy loom as crucial factors.

Six-time champion Jamie Whincup and his Red Bull team are adamant that the latest batch is different to last year’s soft compound, adding to the unpredictability.

Teams had run on the latest soft rubber during pre-season testing, although the Victorian teams had to deal with a new track surface at Winton that made comparisons difficult.

“I believe there’s been a tweak made to the compound to make it a bit softer,” Whincup told Speedcafe.com.

“It’s certainly a good, grippy batch. The cars have felt great on the soft tyre this year (at Ipswich and Adelaide).

“I think the deg will be a bit higher as a result, which I think is what they want.

“Especially in this heat, the deg is going to be very high, so it’s going to be all about keeping them alive.”

Dunlop motorsport manager Kevin Fitzsimons told Speedcafe.com that there had been no change to the compound ordered from Japan, but that variations in the product can always occur.

“When the main ingredient comes from a different plantation and a different season you can get a small variance,” Fitzsimons said.

“We had some feedback after the test at Ipswich that there was more grip, but the gap between a green hard and a green soft (today) wasn’t an enormous jump.

“At the end of the day the production run is the same for everybody, which is the most important thing.”

Other drivers, including practice pace-setter Scott McLaughlin, were less convinced of a difference between the soft compound batches.

“It feels pretty similar to me, but if anything it probably dropped off pretty quick,” McLaughlin told Speedcafe.com.

“It dropped off a lot faster from the first run to the second run in practice, but our car still felt pretty good.

“It’s really hard to say because of the temperature and the fact that we’ve not run them here before.”

High temperatures predicted for Saturday ensure that tyre life will be a major factor in the 125km sprint, which will feature a single compulsory pitstop.

“We’ll wait and see what everyone does, I think you’ll see some different strategies,” said McLaughlin.

“It depends on where everyone qualifies as to how much risk they take.

“I’m just glad there’s only going to be one compound on Sunday.”

Only hard tyres will be used on Sunday following a decision from V8 Supercars not to risk running the soft rubber in the longer, 250km race.