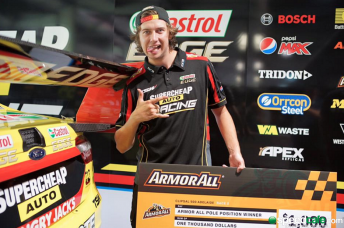 Chaz Mostert says that scoring a pole position at the Clipsal 500 today felt almost as good as his 2014 Bathurst 1000 victory following a five-month recovery from injury.

The Prodrive star broke his left leg and wrist, as well as suffering left knee ligament damage, in a horror qualifying crash at Bathurst last October.

Having failed to trouble the top 10 in either practice or the first qualifying session, where he ended up 12th, Mostert’s last gasp Race 2 pole proved a major surprise.

“I was pretty emotional out there. I’d put that pole position just under Bathurst now in terms of moments in V8 Supercars.

“For me, to come back five months after a broken leg, wrist and some (knee) ligaments, to be able to do this on this hard track with such stuff competition is an absolute credit to the whole team.

“I didn’t know how I was going to roll out here. I knew the body feels up to the task, but after having that much time off you don’t know if you lose that edge.

“I under drove it a little bit in the first one on the soft tyre, but I’m pretty happy with the package. It’s amazing.”

Mostert reflected on his road to recovery, which recently included two competitive go-kart meetings in order to be ‘race fit’ for the V8 Supercars season.

“The first two months were definitely the hardest for me just sitting around and watching V8s,” he said.

“I’d rather be at the track racing. The hardest part of the whole rehab was just letting things settle down after surgeries and start healing.

“Then there was the next phase of trying to push the body through some of the tight restrictions with scar tissue and building muscle back that had faded over two months.

“After I got out of that period it was quite enjoyable pushing the body through its barriers to get it to where it needed to be.

“It was rewarding because the harder you pushed with your physio, you’d hit your milestones.

“From the first time you get out of the wheelchair to getting on double-crutches and not being able to walk that far due to the pain.

“Then losing all pain, throwing crutches out and start walking around. It actually cheers you up every milestone you hit.

“Getting back in a go-kart was pretty special for me too, going back to where it all started with our families racing around and having a bit of fun.

“Seeing little tackers that were seven or eight, it really inspired me to get back to doing what I love doing.

“When I came across the line and they said I had pole, I had to get the ear wax out and ask ‘what did you just say?’.

“It’s a pretty amazing experience because I didn’t expect it until at least mid-season.”

Mostert’s first race back will be held in extreme conditions tomorrow, with temperatures predicted to reach 39 degrees.

“It’s really hot out there, but the cool suit and everything else in the car seems to be working well,” he said.

“If those things can stay on, it’ll still be hard, but it’ll make it easier. If one of those things fail then it’s going to be a long day.”