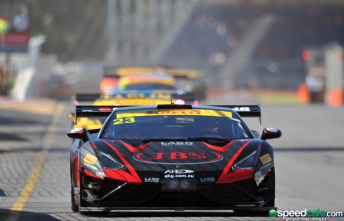 Roger Lago emerged victorious in the opening race of the Australian GT Championship at the Clipsal 500 Adelaide.

The Lamborghini driver ran inside the top 10 for the first half of the race before finding himself in the lead following the mandatory pit stops.

Aided by a shorter compulsory stop time, the Brisbane driver enjoyed a relatively lonely race as he took the chequered flag by 8.7s from Tekno Autosports’ Nathan Morcom.

A solid run from the Darrel Lea McLaren 650S of Klark and Tony Quinn claimed the final spot on the podium.

The brand new Mercedes AMG GT3 of Craig Baird and Scott Taylor led the early laps with the former marching into a 3.4s lead from Morcom, the #1 Audi of Geoff Emery and Nathan Antunes’ Tekno McLaren.

However, a safety car caused by Hayden Cooper who became stranded in the Turn 11 gravel trap before the pit stop window opened hampered his victory hopes.

After handing the car to Scott Taylor, the Erebus run Mercedes came home in a lowly 17th position.

Mark Griffith endured an impressive run in his Mercedes AMG GT3 to finish fourth as he made the most of his shorter pit stop time compared to the front runners.

The Lamborghini shared by Glen Wood and Justin McMillan edged the Auntes/Elliot Barbour McLaren to fifth spot in a thrilling dice to the flag.

Tony Walls settled for seventh having found himself in contention for a podium after the pits tops ahead of the Peter Hackett/Dominic Storey Eggleston Mercedes.

Marcus Marshall brought the Supabarn Supermarkets Audi R8, he shares with James Koundouris, to the finish in ninth.

Meanwhile, a stellar drive from reigning champion Christopher Mies saw the German surge from 19th after the pit stops to complete the top 10.