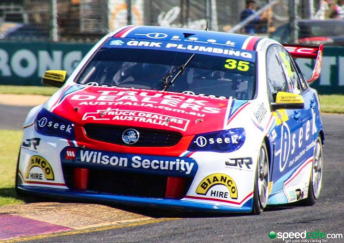 Driving in front of his home crowd, Hazelwood bumped fellow South Australian Josh Kean from the top spot with just under three of the session’s 15 minutes remaining.

Fullwood brought out the red flags just moments later when a suspected mechanical failure pitched the MWM Ford hard into the outside wall at Turn 8.

The teenager walked away from the crash, which saw the ex-FPR chassis sustain heavy left-front damage.

After a moment of deliberation, officials elected against restarting the session for its final 1 minute and 48 seconds amid repair work to the concrete wall. 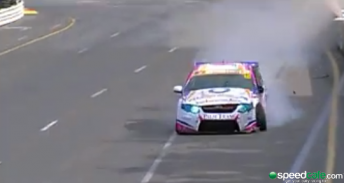 Hazelwood’s 1:21.55s had proven 0.16s quicker than Kean, who had in turn eclipsed the top previous generation Holden of Paul Dumbrell by 0.05s.

Having just gone sixth, Jacobson was fastest of all to the end of the first sector on his following lap before the red flags flew.

James Golding survived an early touch with Matt Palmer on his way to seventh, while Macauley Jones, Shae Davies and Richard Muscat completed the top 10.

Race 1 of the Dunlop Series will take place from 1715 local time.