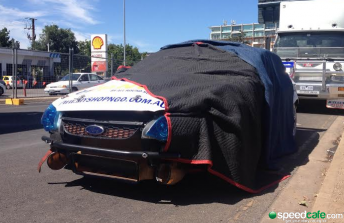 Bryce Fullwood’s Ford after its crash

Bryce Fullwood expects to sit out the remainder of the Dunlop Series season opener after escaping injury in a heavy crash during this morning’s qualifying.

The 17-year-old’s MW Motorsport Ford became the first victim of the weekend at Adelaide’s infamous Turn 8 sweeper, with the crash bringing an early end to the session.

The severity of the impact moved the concrete barrier, forcing officials to delay the start of the following V8 Supercars Championship practice.

Fullwood and the team were at a loss to explain the crash afterwards, thanks in part to the extent of the damage to the car’s left-front corner.

“I was kind of expecting it to be my error, but from the data it’s pretty hard to explain,” Fullwood told Speedcafe.com.

“Initially it pointed in pretty good but then it was just mega understeer and there was no way I was going to make it.

“We hadn’t had any big kerb strikes beforehand or anything like that.

“The only thing I did do was run over the exit kerb at Turn 7, but everyone was doing that so it wasn’t something out of the ordinary.

“It’s almost as if it was a slow leak in the left-front tyre, but it’s hard to see at the moment.” 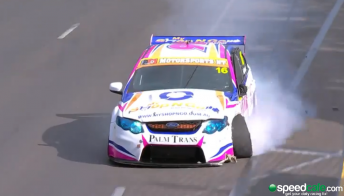 Although physically fine, Fullwood expects that chassis damage – which will be inspected by expert Paul Ceprnich at the circuit this afternoon – will rule him out of the meeting.

“I’m absolutely fine, which just goes to show how safe a race car they are,” he said.

“It was the biggest hit I’ve had by far, but I’d be ready to race again if the car was.

“We’ve probably given it a five percent chance of running again, but we’re just going to wait for Cepi to look at it.

“We’ve got all the bits to fix it, but the chassis is kinked in a few places so it’s pretty much game over.”

Fullwood has moved to MWM this year following a rookie campaign last year in a Paul Morris Motorsport Holden.

“The car is good and the team is just awesome,” he said.

“I’ve learnt so much already. The car is a lot different than my old one so I’m taking a while to build up to it.

“But the team has such an archive of data on these cars and know how they work on every track.

“All the hard work on getting the car set-up is pretty well done, it’s just fine tuning from there.”