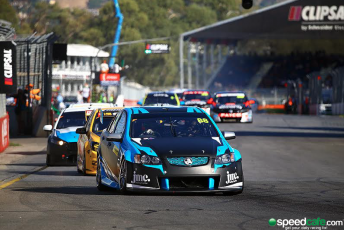 Paul Dumbrell on his way to victory

Paul Dumbrell kicked off the new Dunlop Series season with a relatively comfortable victory in an incident packed Clipsal 500 opener.

The Eggleston Motorsport driver took the chequered flag under the Safety Car from Andrew Jones in the Brad Jones Racing Car of the Future Commodore, with the Prodrive Falcon FG X of Garry Jacobson in third.

Dumbrell slotted into second spot at the start behind the flying Josh Kean, who leapt into the lead as he took advantage of a slow starting Todd Hazelwood.

Kean led the early laps before coming under increasing pressure from the VE Commodore of Dumbrell, who eventually slipped by the South Australian at Turn 9 on lap 3.

Once in front Dumbrell surged into an eight second lead before the Safety Car was deployed when Dan Day ran into the wall at Turn 4.

Dumbrell held his nerve on the restart but had to endure a second Safety Car period when Kean ploughed into the wall at Turn 1 in a crash-filled closing stages.

The incident followed a spin for Kean while trying to overtake Jacobson for third at the final corner.

While recovering the car he then collided with James Golding, who had been running in the top six, which broke the steering on Kean’s Commodore causing the resulting Turn 1 incident.

Jack Le Brocq managed to bring his Prodrive Falcon FG X home in fourth after recovering from a lock up midway through the race which dropped him down the order.

Richard Muscat made the most of the dramatic final laps to finish fifth.

It proved to be an eventful day for pole-sitter Hazelwood which ended in retirement.

The South Australian suffered a cut tyre when he glanced the wall at Turn 12, while occupying fourth, mid-way through the race.

He then encountered further contact with Steve Owen when the Matt Stone Racing driver attempted to dive into the pits moments later.

Despite the side-to-side contact, Owen brought his FG Falcon to the finish in sixth, with Shae Davies in seventh.

Douglas’ top 10 finish came after recovering from a spin earlier in the race caused by contact from Adam Marjoram, who received a drive-through penalty.

Kurt Kostecki, teenager Alex Rullo, Chelsea Angelo were all caught up in incidents in final laps, along with Macauley Jones, who damaged his COTF Commodore after two collisions with the wall.

Bryce Fullwood failed to make the start after being ruled out of the weekend following a crash in qualifying.

The Dunlop Series will return on Saturday with a 15 minute qualifying session followed by a 30 minute race.