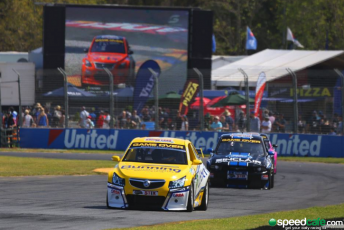 Brendon Pingel has won Race 2 in the opening Aussie Racing Cars round in Adelaide.

Pingel jumped best from the front row and quickly established a lead over Race 1 winner Craig Woods, before being reeled in and taking a narrow victory in the seven-lap affair.

Ben Walsh and James Duckworth had a similar battle for third, the latter setting back-to-back fastest laps on Laps 4 and 5 to close the gap.

Duckworth took advantage of traffic to make the pass exiting Turn 8 on Lap 7, before Walsh regained the place on what proved to be the final corner.

Kyle Clews had another bruising race in his return to the category, making an error and experiencing a jarring ride over Senna Chicane to follow up on a three-car crunch in Race 1.

David Sieders converted pole to an opening race victory in the V8 Utes.

Sieders kept clear of the action behind, first when Kim Jane and Craig Dontas banged into each other entering Wakefield St for the first time, then when Jane swiped the tyre belt at Turn 9 and found the concrete wall.

That incident, and another at the same corner between Nandi Kiss and Layton Barker, saw the race go yellow on Lap 2, before a two-lap run to the finish.

Mason Barbera nearly didn’t make the restart after being shunted onto the grass as Ryal Harris jumped too early from fifth in the queue.

Barbera caught the slide and ensured a three-way battle for second with Dontas and Kris Walton, Dontas prevailing as they ran line astern to the finish. 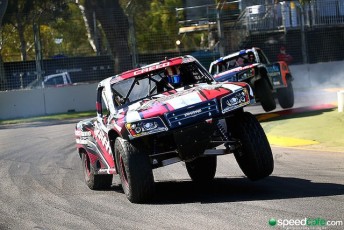 Sheldon Creed pulled off a final-lap pass and then survived a mid-air collision to claim a chaotic opening Stadium Super Trucks race.

Toby Price was in the box seat as he led following the Lap 4 competition caution, only to hit the wall at Turn 11 and cause a pile-up.

Price was collected by Creed – who had taken out Matt Mingay just half a lap earlier – while Paul Morris emerged from the melee with the lead.

Creed recovered to out-brake Morris at Turn 9 on Lap 8, but the 2014 Bathurst 1000 winner attempted an audacious pass at the final corner, shortcutting across pit entry and diving into the corner.

The pair ran side-by-side up the main straight, touching in mid-air as they launched off the first jump, Creed crossing the line less than two tenths of a second in the clear.

The 2015 Stadium Super Trucks Champion had earlier survived a potentially monumental incident when he got fully sideways off the first main straight jump after tangling with Mingay and Price on Lap 4.

Matthew Brabham, who in May will contest the Angie’s List race and the signature Indianapolis 500, finished fifth after running strongly for several laps in fourth.

The Chevrolet Monza driver initially lost out on the start to John Bowe before passing the reigning series winner following a slick move at Turn 4 on the second lap.

An incident involving Tony Karanfilovski at Turn 1 brought ensured a lengthy Safety Car period as marshals recovered the Mustang after contact with the wall.

Once racing resumed there nothing Bowe could do to stop Ritter as he went on to take a relatively comfortable victory after just eight of the originally scheduled 12 laps.

Glenn Seton claimed the final podium position in third ahead of the AMC Javelin of Jim Richards.

Eddie Abelnica came home in fifth in front of the Ford Falcon XY of Steven Johnson.

The Touring Car Masters will return to the Adelaide streets on Saturday for a 12 lap race, scheduled to begin at 1105 local time.